Are your little spawns just like you???  Here are a few series that my eight year old loves maybe yours will too... 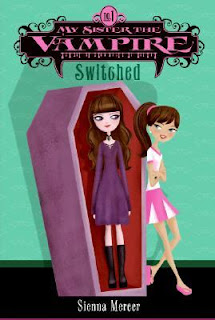 When Olivia Abbott moves to town, she's excited to join the cheerleading team and make new friends. Then she meets Ivy Vega. At first, Ivy, pale and dressed all in black, looks like Olivia's opposite. Then the girls look beyond the glittery pink blush and thick black eyeliner to discover they're identical--identical twins!

Olivia and Ivy are brimming with plans to switch places and pull every twin trick in the book. But Olivia soon discovers that she and Ivy aren't exactly the same. Ivy's a vampire. And she's not the only one in town. (Goodreads) 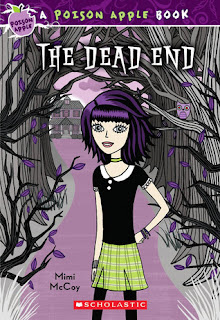 Casey Slater can’t believe her bad luck. It’s the summer before seventh grade, and instead of the perfect vacation she’d planned with her best friend, Casey is in a remote country town, where her parents are restoring an old, creaky, creepy house. Worst of all, everyone else in town thinks the old house is haunted. And soon Casey thinks so, too -- a vase explodes, a heavy china cabinet falls over on its own -- and it seems like the ghost doesn’t want them there. Casey thought she’d be dying of boredom, but now she’s scared to death! (Goodreads) 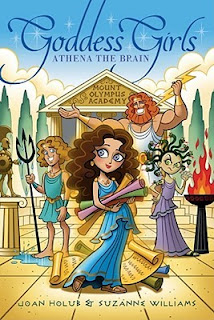 The Goddess Girls series by Joan Holub and Suzanne Williams puts a modern spin on classic Greek myths! Follow the ins and outs of divine social life at Mount Olympus Academy where the most privileged godboys and goddessgirls in the Greek pantheon hone their mythical skills. Aladdin Paperbacks (Simon and Schuster) ages 8-12

Athena has always been above average. She has never quite fit in at Triton Junior High, but who would've guessed that Athena is actually a goddess? Principal Zeus's daughter, to be exact.

When she's summoned to Mount Olympus Academy, Athena thinks she might actually fit in for the first time in her life. But in some ways, school on Mount Olympus is not that different from down on Earth, and Athena is going to have to deal with the baddest mean girl in history: Medusa! (Goodreads)