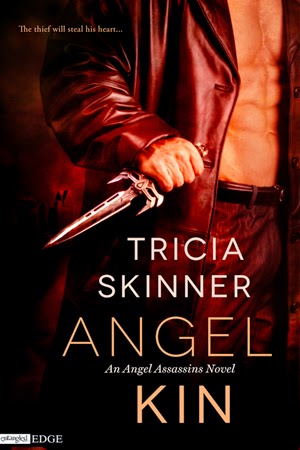 "Sometimes even Angels' find themselves questioning Heaven's dictates, and must take matters into their own hands."

While channeling Robin Hood's "steal from the rich and give to the poor" attitude at a local politician's house, ex-con Katie Logan witnesses a forced suicide. Dirty or not, supernatural or not, he didn't deserve to die, especially not by his own hand. But with her record, stepping forward as a witness isn't an option. On the run from the police and the murderer, she turns to The Bound Ones for help.

When a beautiful woman comes to The Bound Ones, half-angel assassin Cain is immediately drawn to her. But when she fingers him as the killer, he can come to only one conclusion. The twin he thought was dead is very much alive…and trying to send him a message. Unfortunately, that message is: "You're next."

It's a race against time as Cain fights to save the woman he's falling in love with before his brother Abel destroys them both.  (Goodreads)


Finally, an Urban Fantasy centered in the D!  Lets face it, what better place to be centered around Paranormal Activity than Detroit city.  Where the crime rate is so high that even the Mayor of the city is a widely known criminal, so having seething creatures around should come as no surprise.

Angel Kin is the first of a potentially amazing Urban Fantasy series', Angel Assassins. Involving Fallen Angels, and the dictate where Heaven decreed that all of their children, Nephilm, and wives be decimated. Only four children were allowed to survive, The Bound Ones, after the pleading of one warrior angel, Tanis.  So it should come to no surprise to Heaven when another faction us formed, The Renegades.   A group of Fallen Angels Hel bent on seeing Heaven taken down.  After the brutal war that took the lives of their families,  rage is the only emotion they truly feel, and what they raised Abel on, the Nephilm who got away. The question remains,  is he the only one?

Angel Kin is centered around two Nephilm brothers, Cain and Abel, by being named such one could say they were doomed from the start.  After being secreted away by the Renegades at a very young age,  brought up on nothing more than rage and brutality,  Abel has thought of nothing more than revenge against the brother whom he believes abandoned he and their family to perish.  Planning on not only destroying his name but taking his life as well, it seems pure dumb luck when an eye witness identifies Cain as the killer, being identical twins comes in handy with his plots and schemes.

Cain is taken aback when an eye witness seeks The Bound Ones aid in protection from a killer whom she seen not just kill a man, but force him to kill himself, fingers him as the killer.  Indicating the impossible, the brother he thought he had lost centuries ago was still alive.  But that hope turns into something else once his suspicions are confirmed with a note carved into the dead body, "You're next".

Skinner has created a world where the Gangsters are truly out for blood since they are Vampires, and where Heaven has turned their Half-Breeds into deadly Assassins.  Where people will have even more reason to fear walking the streets of Detroit alone at night.
No comments:
Email ThisBlogThis!Share to TwitterShare to FacebookShare to Pinterest
Older Posts Home
Subscribe to: Posts (Atom)