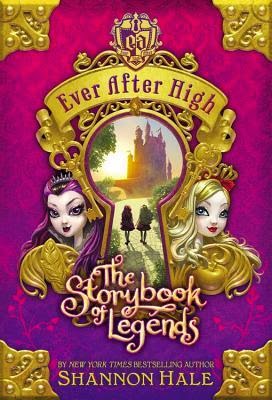 THE STORYBOOK LEGENDS by Shannon Hale
Ever After High Book 1
Published October 8, 2013 by Little, Brown and Company

For this month, Vanessa has decided to switch things up a it. Instead of a Movie of the Month she has picked a Book of the Month. There are also webisodes as well that you can watch along with you little Spawn. If your Spawn is male, no worries, she has picked an alternative for him as well. So, while you are reading your own gruesome tales, they can be reading their magical ones. The plus? You can tell them the history of all of the characters they will come to love. And even if they act annoyed at you telling them, they really do want to know.

At Ever After High, an enchanting boarding school, the children of fairytale legends prepare themselves to fulfill their destinies as the next generation of Snow Whites, Prince Charmings and Evil Queens...whether they want to or not. Each year on Legacy Day, students sign the Storybook of Legends to seal their scripted fates. For generations, the Village of Book End has whispered that refusing to sign means The End-both for a story and for a life.

As the daughter of the Evil Queen, Raven Queen's destiny is to follow in her mother's wicked footsteps, but evil is so not Raven's style. She's starting to wonder, what if she rewrote her own story? The royal Apple White, daughter of the Fairest of Them All, has a happy ever after planned for herself, but it depends upon Raven feeding her a poison apple in their future.

What if Raven doesn't sign the Storybook of Legends? It could mean a happily never after for them both. (Goodreads) 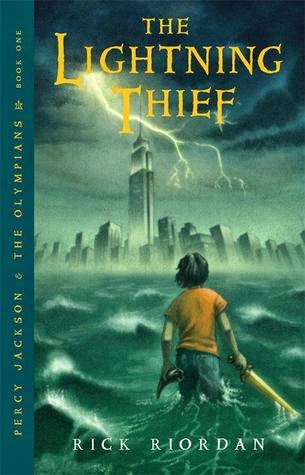 After this read, be sure to watch, and they enjoy the movie's together. Warning: The gorgeous Pierce Bronson is not in the second movie. BUT the rest of the original cast is.

Percy Jackson is a good kid, but he can't seem to focus on his schoolwork or control his temper. And lately, being away at boarding school is only getting worse-Percy could have sworn his pre-algebra teacher turned into a monster and tried to kill him. When Percy's mom finds out, she knows it's time that he knew the truth about where he came from, and that he go to the one place he'll be safe. She sends Percy to Camp Half Blood, a summer camp for demigods (on Long Island), where he learns that the father he never knew is Poseidon, God of the Sea. Soon a mystery unfolds and together with his friends -- one a satyr and the other the demigod daughter of Athena -- Percy sets out on a quest across the United States to reach the gates of the Underworld (located in a recording studio in Hollywood) and prevent a catastrophic war between the gods. (Goodreads)

This just in, there are more dolls!! ARGH!! Ever After High featuring the Royals and the Rebels.  Of course, my daughter loves the Rebels.  These are NOT the same as Monster High, whole 'nother category all together.  As opposed to Monster High being the children of the monster's most of us grew up with and loved, these are the children of all the fairytale characters' the other kids loved, PLUS the children of the "bad guys", who I still say were just misunderstood, characters' as well.  Click here to visit the site.