Review: The Painting of Martel

The Painting of Martel by L. Bachman
Published May 2017
Review by Janet
5 Bloodcurling Screams! 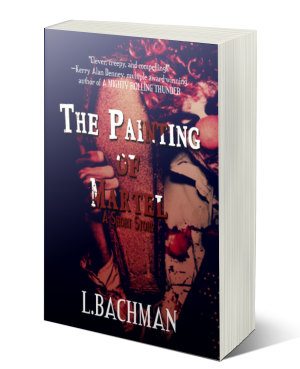 Items and oddities connected to the occult make for quite a dangerous atmosphere, but Damon can’t help liking what he likes. Kenneth, his roommate, finds it all strange and has been keeping more and more to himself as Damon’s obsession grows in intensity. Coming across a book about a clown entertainer and serial killer known as the Painted Face Killer, Damon is smitten with the fact that the killer was also an amateur painter. It was this pastime that helped investigators locate many of the Painted Face Killer’s victims with the help of his final artwork, but it was the painting itself that captured Damon’s attentions.After discovering the painting is for sale, Damon wants it more than any oddity ever collected, but after purchasing it, he begins having nightmares of the killer speaking to him. James Martel has been looking for the perfect vessel—any willing one—and Kenneth suffers Damon’s obsession, paying the ultimate price. (Goodreads)

An extremely short story that really grabs you by the throat. Starts off creepy and ends that way. This painting is quite unique and totally evil as readers will see. Damon's obsession with the occult makes him the perfect candidate to own this painting. Horror fans will absolutely love this one. My only complaint is that this was way too short and I needed more.
No comments:
Email ThisBlogThis!Share to TwitterShare to FacebookShare to Pinterest
Older Posts Home
Subscribe to: Posts (Atom)