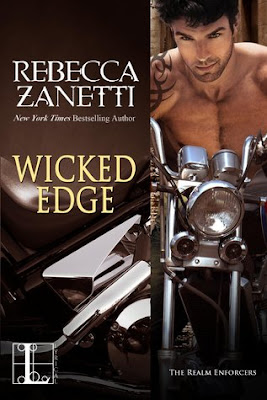 "Sometimes its your weaknesses that make you so much stronger than your enemies." 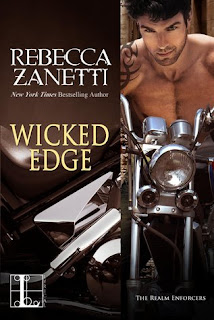 Daire Dunne is more than ready to take a quick break from his duties as a Coven Nine Enforcer. When he spots a sexy blonde across a Titan’s of Fire party, it’s not long before she’s on the back of his Harley on the fast track to his apartment. Unfortunately, one overheated kiss in, the woman drugs Daire and steals valuable files that can’t fall into enemy hands. The second he comes to, the hunt is on...

Now that Cee Cee has the information to take down an enemy that destroyed her family, she can implement her perfect plan for revenge. Nothing will stop her, not even a shockingly sexy enforcer barging into her life. Not even the spectacular, fire-branding sex engulfing them. But if Daire ever figures out who her family really is, all bets are off...
Praise for Wicked Ride“Non-stop action and a hero to die for!”—Alexandra Ivy“Fast-paced romance . . . very compelling. Highly recommended.”—Library Journal (Goodreads)


First of all, let's try to clear up some of the rumors I've been hearing right now. Wicked Edge and the Realm Enforcer's Series as a whole, is NOT an MC contemporary novel. Far from it. It is a continuation of the incredible, delectable Dark Protector's series, with the focus being in the human world. The MC aspect only has to do with the Dunne brothers' ongoing investigation on the deadly drug taking out witches, Apollo. Don't get me wrong, Zanetti has used what little MC activity within these books to its full capacity making for some very adrenaline pumping fight scenes. And the rival MC? A group of Grizzly Bear shifters, so in no way shape or form are these contemporary novels.

That being said, I'm loving it. The guest appearances, the tie ins, the relationships/matings that are continuously bonding the families that fans already know and love are fangtastic, without being overwhelmingly so. The Realm Enforcers is a strong enough series to develop a fan base on its own while more than enough to keep Dark Protector fans from going into withdrawals.

Daire Dunne is more than sure that fate has planned for him to find a mate that will be obedient, docile and completely organized. He finds out just how far from the truth that is after he ends up being drugged by the "enhanced human" he brings home with him for a night of fun in the sack. What he gets is far more complications in his life than he ever thought possible, along with a possible lead on the witch helping with the making of Apollo. If he can survive the woman fate has brought kicking and screaming into his life, he may be a few steps closer to closing his case.

Cee Cee has plenty more secrets than just what her name is and her true species, and she's very good at keeping them. She has been plotting for almost thirty years revenge against the demon who killed her mate, and the time has come to put all of those crazy plans to action. As strategically as she has everything planned there should be no complications, except for the deadly enforcer she pissed by drugging once, or twice. Not that she's really keeping count or anything. Cee Cee has had her life decided for her since birth due to not having the same powers as her brethren, but now her time has come to show everyone how strong she truly is. But will she survive to enjoy the outcome?

Fast-paced, action packed edge of your seat plots and characters readers can't help but love. This is a Paranormal novel to be loved regardless of gender. A true must read, right along with the rest of the series.
No comments:
Email ThisBlogThis!Share to TwitterShare to FacebookShare to Pinterest
Older Posts Home
Subscribe to: Posts (Atom)