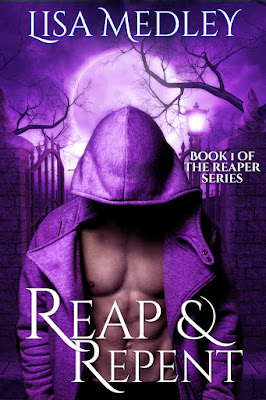 Ruth Scott can read the energy of every person she meets. Then she meets Deacon Walker. She can see his ice-blue eyes, his black hair, and his gorgeous face. But this beautiful stranger has no aura.

Deacon is just as unsettled by Ruth—and, having spent more than two hundred years ushering souls to Purgatory, Deacon is seldom shocked by anything. As he helps Ruth to understand her true nature, she awakens desires that he decided long ago a Reaper can’t afford.

A demon invasion forces Deacon to confront the darkness in his own past even as he fights to save the human souls he’s charged to protect. When he’s taken captive, his first concern is for Ruth. But Ruth just might be able to save herself—and the Reaper she can’t live without—if she can learn to wield her newfound powers.

What does a guy have to do around here to get some service? Deacon Walker marveled as he glared at the undulating queue of grotesque reapers in front of him.

For all that’s holy, move the hell along already.

It had been a long week, and it wasn’t over yet. He needed to make at least one more pass through the hospital circuit before he could call it a day. He could already feel the tug of a freshly departed soul. Again. People were dropping like flies lately.

He massaged his brow, trying to soothe his exhausted patience as the line inched forward at a snail’s pace.

He was worn thin. Over the past few weeks, three demon soul poachers had popped up in his fair city of Meridian like poisonous mushrooms after a hard rain.

While it wasn’t unheard of for one to slip out from Hell every now and then, three was a nightmare.

When it got topside, a demon’s M.O. was to steal a human body, poach a few souls from the dead and dying, and then make its merry way back to Hell, taking its host’s soul along for the ride. The only way to save the souls a poacher was carrying was to behead the host with a scythe. Not a pretty thing to do, but the poor suckers were too far gone by then to survive anyway. No human could withstand the pressures of being ridden by a demon. And it was worth it to save a handful of souls, not to mention inconveniencing the demon.

Deacon refused to lose any souls from his territory. At all. So far the score was Deacon, 3. Demons, 0. 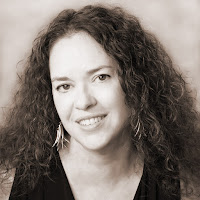 Lisa has always enjoyed reading about monsters in love and now she writes about them, because monsters need love too.

She adores beasties of all sorts, fictional as well as real, and has a farm full of them in her Southwest Missouri home, including: one child, one husband, two dogs, two cats, a dozen hens, thousands of Italian bees, and a guinea pig.

She may or may not keep a complete zombie apocalypse bug-out bag in her trunk at all times, including a machete. Just. In. Case.

The author will award a $10 Amazon/BN gift card to a randomly chosen winner via Rafflecopter.