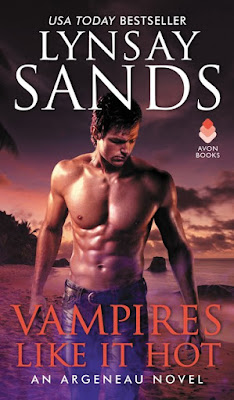 New York Times bestselling author Lynsay Sands brings the heat in this new Argeneau novel, as one woman is rescued by an irresistible immortal …
“Vampires...”
When Raffaele Notte pulls a barely dressed, disoriented woman from the ocean, the last thing he expects is for her to utter that word. The immortal has come to the island resort to help his cousin, but now, it seems, there are rogue vampires dining on unsuspecting tourists. And he soon realizes that not only is Jess a target, she’s also the life mate he’s been waiting for…
Vampires are real. Jess would’ve never believed it until she saw them with her own eyes. She knows she has to get off the island, and her gallant rescuer has offered to help. There’s something about Raffaele that’s unlike any man she has ever met, and his touch sends pleasure through her that is beyond all imagining. But when Jess discovers who he really is, will she risk life as she knows it for a chance of forever by his side?

Vampires Like It Hot by Lynsay Sands
My rating: 5 of 5 stars


I received this as an arc and OMG i LOVED it! Even though this is book 28 it doesn't feel like torture and that the author is dragging it out just for the sake of money, this book is legit awesome like all the others. The witty one liners in this book are amazing and had me laughing the entire time I read it- especially the nickname that Jess makes up for "hot naked Raff". Raff saved Jess from Vasco and Cristo and repeatedly made sure everything was thought of and but Raff did everything to keep her happy except not tell the truth the entire time and then had it blow up in his face. Vasco was a great character and although his language was crude at times he really stepped in a lot in unexpected ways which was nice to see for a "vampirate". I definitely recommend this book though as I enjoyed it a lot.