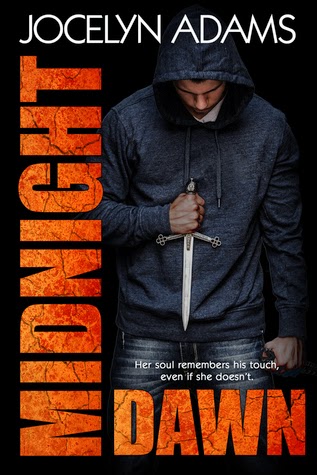 "Sometimes your soul knows exactly what it is you need, even if your mind has yet to realize it."

Her soul remembers his touch, even if she doesn’t.

With only three days until the wraith king turns the earth into an all-you-can-eat buffet, Addison Beckett is forced to enlist brooding sentinel Asher Green’s help to unlock the Mortal Machine. According to the founder, all she has to do is find the sanctuary—the same sanctuary she can’t remember because Asher erased her memories.

Trying to save humanity while navigating Asher’s lies is a royal pain. But the more time she and Asher spend together, the harder her soul tries to remind her what else he’s made her forget—that he loves her, wants her, needs her.

When she’s trapped by the wraith king and forced to pick who will stand by her in the coming battle, Addison is faced with an impossible choice: the sentinel she loves who refuses to love her back, or a powerful stranger who insists they’re meant to be together. Her decision will decide the fate of humanity, and once decided, can’t be undone.  (Goodreads)

Think The Mortal Instruments minus the incest and with a much more complex storyline. Adams brings a brand new world to the page, one that may have readers second guessing their beliefs.  And while Addison may still be viewing everything through lust-filled eyes, she has finally decided to be the Architect she was always meant to be.  Though a lot of her obsessive musings about a man who seemingly wants nothing to do with her, and does his best to drive him away at every turn, do distract from the story and will have readers wanting to slap the stupid out of her.  In the end it will be explained why she has such an infatuation with him, and it goes even deeper than the brief relationship they had in Book 1, Darkside Sun.

Addison has no memories of her life before the Machine, which makes it that much easier for her to accept her role as the Architect.  Sadly, not many others trust her enough to follow her lead.  Trying to convince the other Guardians that she is there to help and rebuild the Machine will be an even bigger battle than facing the Wraith King.  Especially after she has killed Marcus, and tells them what she believes each and every one of them to do, have physical contact with one another.  After what happened with Taka's girlfriend decades ago, only a handful of people are willing to take that risk.  The problem is if they do not the Mortal Machine will never reach its true potential, nor will they have enough power to defeat the wraiths and save humanity.  Addison also must deal with the wholes in her memory.  She knows that she asked Asher to erase her past in order to protect her father, but there are even more wholes than there should be.  Memories from after she was already in the Machine, and echoes of those memories are haunting, and taunting her.

Asher has been plagued by what he believes to be premonitions of Addison's death.  So he has convinced himself that taking away her memories of the two of them together, of the love they shared, and staying away from her, he can prevent it.  What he fails to realize is the two of them together are much stronger than either of them are apart.  And when the Wraith King continues to call Addison by the name of Adaline, teasing that the two of them have no clue who they truly are, will he realize those premonitions just may be echoes of his own memories.

Enter a strange new Guardian who comes in just the nick of time to save the day.  One willing to go to any length to get Addison, and the Machine, whole and ready and at the apex of their potential.  Only question is, why is he so determined?  Why has he been exiled from the Machine all this time?  More importantly, do they have yet another trader in their mists?

Midnight Dawn is one of those can't-put-down-until-I-finish type of book, the kind where you tell yourself, 'Just one last chapter...'.  A true must read for PNR and Sci-Fi fans.  There is romance, but not so much that it exceeds the entire plot.  Just ignore some of her inner monologue.