Release Day Blitz: Mine For One Night

Mine For One Night by Ju Ephraime
The Twin to Twin Saga Book 1
Published February 14, 2019
Contemporary Romance/Erotica 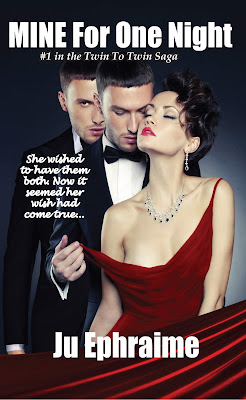 Synopsis -
Lynn is in a quandary. Ever since she could remember, she's had a thing for twins, not just any twins, identical twins. Now she is in a relationship with one half of the most handsome set of identical twins, but she can't stop thinking about the other. She had one, but she wants them both.

Nicholae and his brother have a great relationship. They never covet each other's property. If one has something, and the other wants it, they share, whatever it was. But now Nate has something Nicholae wants, and he doesn't know how to ask to share because something tells him Nate won't share this with him... his new girlfriend, Lynn.

Lynn has a need, and Nicholae has a want, and then there's Nate in the middle. Will he give in to his brother, or will he put his foot down and deny him this one time? 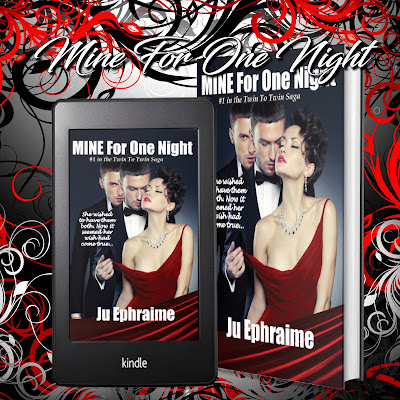 Ju Ephraime is an award-winning Amazon bestselling romance author. She's been reading romance since her early teens and now writes her own, with a lot of heat and strong alphas. Her recent historical novel I Will Follow To Eternity and Beyond, won the Readers’ Favorite Gold Medal for 2017 BEST HISTORICAL ROMANCE. Ju's paranormal romance White Magic Woman was seconded in Amazon’s Breakthrough Novel Contest. Her Western Historical Romance, One Hell of A Ride, won an award in Readers’ Favorite 2017 lineup. In 2018, her memoir, But for the Love of My Father, won best memoir in the Pinnacle Book Achievement Award. You can follow her at the sites below. She loves hearing from readers.