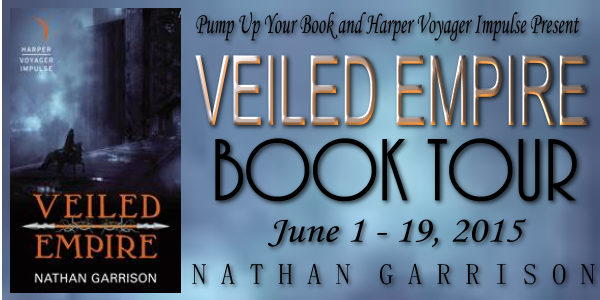 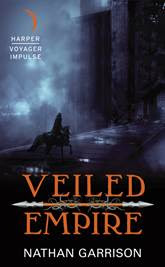 The Empire is Shrouded, not only by the barrier that covers the land, but by the lies and oppression of the mierothi regime. Magic is the privilege of the elite, and the people of this shadowed country have forgotten what it means to hope under their rule.

But there are some who would resist, with plans put into motion millennia before. For returned to the Empire is a valynkar, servant of the god of light, and with him come the strength and cunning that could tip the scales to end the Emperor’s reign. He has gathered a group of heroes ready to ignite the flame of rebellion and fight against the dark power that has ruled for nearly two thousand years. A power that has champions of its own.

Guest Post by Nathan Garrison:
Bad Girls of Fantasy
Villainess? Anti-heroine? Rebel with a dark side? However you want to label them, we all know who they are. These women never take no for an answer, and always know exactly how to get what they want - which is usually the world. Whenever their scenes pop up in our favorite books or series, we can’t help but grin and hunker down for the delicious ride to come. I give you … my top five “Bad Girls” of fantasy. (Spoilers, of course.)
5) Graendal (The Wheel of Time - Robert Jordan)
Though most of the female Chosen (don’t ever call them Forsaken) have a shot at making this list, for me Graendal is hard to beat. She is a master at manipulating people and events from the shadows, yet when the time for battle comes she can still dish out destruction with the best of them. She keeps herself wrapped in a cloak of excess and sensuality, a disguise few are able to look past, often to their demise.
4) Sabetha (Gentleman Bastard series- Scott Lynch)
Sabetha may be “off-screen” for most of the first two books in this series, but even then we can see the dizzying effect she has on the titular hero, Locke Lamora. If she’s not outwitting him planning a heist or rigging an election, she somehow manages to play his heart like a fiddle without even meaning to. She has no times for his games, after all. She’s got a life of her own.
3) The Lady (Chronicles of The Black Company - Glen Cook)
Escaped a centuries long imprisonment to become ruler of an evil empire? Check. Makes slaves of the most powerful sorcerers in the world? Check? Still manages to have a soft spot for a certain mercenary physician? Check. The Lady takes ‘evil empress’ to a whole new level, letting nothing get in her way. Even gods, her vicious husband, and prophesied heroes can’t stand against her power and cunning.
2) Apsalar (The Malazan Book of the Fallen - Steven Erikson)
As if being possessed by the patron god of assassins wasn’t bad enough, try having your memories scrambled and being stranded half a world away from home. Even from this, though, the girl once known as ‘Sorry’ manages to recover. Retaining enough of the skills left behind by her possessor, Apsalar wreaks vengeance across three continents, picking up a few undead dragons as pets along the way and taking out half of an assasssin’s guild, singlehandedly.
1) Daenerys Targaryen (A Song of Ice and Fire - George R.R. Martin)
With titles like Stormborn, Mother of Dragons, the Unburnt, Freer of Slaves (shall I go on?), this is one lady that practically needs no introduction. Though she started penniless and starving, she now commands legions and the loyalty of her followers, and will not rest until she sits in her rightful place upon the Iron Throne of Westeros. 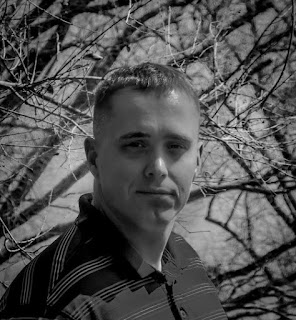 I have two great boys and an awesome wife who is way more supportive of my writing efforts than I deserve. I love playing guitar (the louder the better), cooking (the more bacon-y the better), playing board/video/card games with friends and family, and reveling in unadulterated geekery.

Born in 1983, I’ve been writing stories since my dad bought our first family computer. I grew up on tales of the fantastic. From Narnia and Middle-Earth to a galaxy far, far away, I’ve always harbored a love for things only imagination can conjure up. I count it among the greatest joys of my life to be able to share the stories within me.