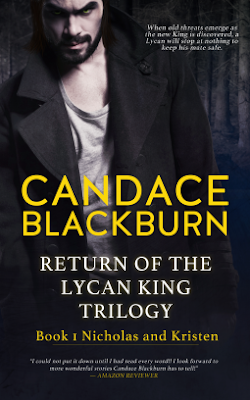 One life, one mate. Nicholas Konstantine has been waiting over a thousand years for his mate. But when he finds her, she's completely unaware of her Lycan biology, and she's battling her own personal demons.
Kristen O'Connor is a recovering addict, with some major trust issues. By not letting anyone get close, she won't get hurt. Yet after one meeting with Nicholas, her walls are crumbling, and she wants more with this man.
But Nicholas reveals his Lycan side, and hers as well. In addition, ghosts from both of their pasts come back to haunt them. Will they face everything together, or will Kristen's fears be stronger than her love?

Return of the Lycan King: Nicholas and Kristen by Candace Blackburn
My rating: 5 of 5 stars


This was a first read of this author for me and I absolutely LOVED IT! I cannot wait for the next book but it looks like it might be a while since this was published in 2015. The chemistry between Nicolas and Kristen was hot. I loved how real Kristen's character was with the flaws she was dealing with mainly in her mind as she had overcome her issues. For me I love when books such of this nature still have very real human characteristics and then those with some of the harder to relate to make it just more believable in my opinion. As normal with mates it is instant attraction, but with Kristen being raised human she doesn't quite understand it which I think is a universal thing when it comes to the "perfect man" showing interest in you. The side characters were perfect and I love the twists throughout the book and they were done just right. Yes there is a cliffhanger but it wasn't the worst one I've read but it will definitely leave the mind reeling. 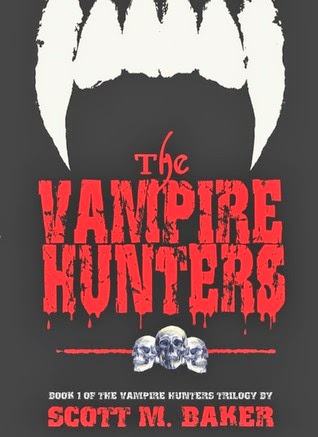 A Fangtastic read for traditional vampires everywhere, regardless of gender.  Action packed with fight scenes so vividly detailed readers will feel as though they are right there taking part in the action.  Filled with blood, gore, thrills and chills to make every horror lover smile.
No comments:
Email ThisBlogThis!Share to TwitterShare to FacebookShare to Pinterest
Older Posts Home
Subscribe to: Posts (Atom)