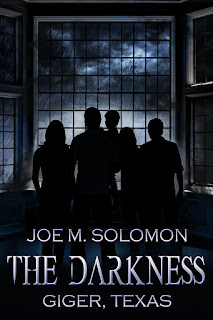 When night falls in Giger, Texas, shadows gather as they always do in dim corners and other areas bereft of light.  But this time they consolidate and attack any who tread too close. Michael Warren, a twenty-four-year-old resident of Giger, finds himself at the epicenter of this horror and is stunned by the losses suffered overnight.  Then the sun sets and the shadows again coalesce, growing more aggressive, the darkness eviscerating anyone it touches.

His only weapon light, Michael struggles to survive and searches frantically for his girlfriend, aiding friends along the way.  When Hurricane Daniel roars ashore, wind gusts shred trees and tear down power lines, plunging all of Southeastern Texas into blackness that only feeds and strengthens the encroaching darkness.  Rising floodwater provides easy thoroughfares from which the darkness can strike as Michael and his friends contend with the elements, clash with criminals, and battle their way to his residence where they will stand against the darkness and fight to survive.

Excerpt:
Startled, Eddie blinked and wiped at his own eyes. “What was…? Hello?”

A box fell behind him.

Eddie spun around, body tight as a knot, eyes wide as their sockets would allow. “Wh-h-h-h-who the hell’s that?” he demanded with as much sternness as he could inject into his quivering voice.

Soft whispers trickled out of a minuscule pocket of emptiness near the back door on the farthest wall. There, amid the gloom, something progressed toward him. At first, its movements appeared mechanical, inelastic. Then it evolved into a smooth flow. A soft ripple. A consolidated wave of darkness.

A total scarefest! Definitely not for the squeamish. This takes place right before a hurricane is about to hit. Those of us who have dealt with a hurricane or are afraid of the dark, will experience real terror among these pages. Michael Warren and his friends have no idea why there are mass murders taking place at night, not just in Giger, Texas, but all over the world. You won't believe what they encounter. Many of you may want to sleep with the lights on after this.

We have a very plausible scenario here that switches to the viewpoint of thecharacters throughout. If you live in the Houston area, you can really visualize this taking place which makes it all the more terrifying. I wasn't sure what to expect when I started this, but it was worth the ride. Seasoned horror fans will be glued to their seats as a new terror takes shape. - Reviewed by Janet

Let’s explore a little about what scares you.  I’ve read books and watched movies that reflect things that scare us.  Sometimes it is waking up and suddenly realizing that you are the last person on earth, i.e. Loneliness.  According to psychiatrists, we need people for everything from simple companionship to feeling good about ourselves.  This notion was examined time and again on the TV series The Twilight Zone. In Where is Everybody?, our main character basically wakes up in a town alone.  He tries a pay phone.  Nothing.  He rushes from a restaurant to the sheriff’’s office, finding no one.  He has a moment of hope when he sees a woman sitting in a car.  Further investigating, however, reveals that it is a mannequin.  When he can find no hope, ultimately our protagonist starts to crack up.


We also see it in Time Enough when the main character survives a nuclear war.  Upon surfacing, the man finds everything has been destroyed.  He is a ferocious reader who wears thick eyeglasses. However, after discovering piles and piles of books he now has all the time in the world to read, he sees another on the ground, bends to retrieve it, and his glasses slide off of his nose and break.  Now he is alone, unable to read, with no one to talk to and nothing to do but wait to die.

In a more recent film, Passengers, the main character is on a spaceship, heading to a new world with thousands of other passengers.  By accident, the main character accidentally awakens.  All of the others still sleep.  Doing almost everything he wants to, from dancing in a virtual club to space walking outside of the ship, he finds it isn’t enough.  He needs a companion and soon finds it paramount.

So we need other people and fear total solitude. What else scares us?  Let’s consider some childhood that sometimes follow us into adulthood.  The three I’ve heard mentioned the most often are the monsters under the bed, the boogeyman in the closet and what lurks in the darkness.  As adults, the darkness continues to frighten us because we are aware now of terrors—like serial killers—that may lay in waiting for us as we walk to our cars late at night. Sick individuals who aren’t out steal our money or carjack us, but just want to see us suffer and die.  Or the lone gunman who unexpectedly sprays crowds with bullets or the man who waits in the shadows, engine running, carefully timing a hit and run.  All for the sake of violence.  But what happens when the menace in the darkness waiting to kill you isn’t a person, but the darkness itself is?
“So what?” some might respond.  “The darkness is intangible.”  But what if it became tangible, not just her or there, but everywhere shadows formed.  And the one thing we knew for certain was that the sun must set.
Again, so might shrug and say, “So what?  I’ll simply turn on the lights.”  What if a hurricane then plowed ashore and took away your light source?  What if the darkness grew so thick that is blocked out the starts from the sky… and the light in your house?  How would you protect yourself if a candle or flashlight simply wasn’t enough light to stave off the darkness?  Would submersing yourself in such a tale take you back to an earlier time in your life when the monster under the bed and the boogeyman in the closet seemed terrifyingly real?


Well, this is what I present to you, dear reader:  A villain you cannot speak with, interview, reason with or evade… ever!

Joe M. Solomon earned a bachelor’s degree from the University of St. Thomas, followed by both master’s and doctoral degrees from Rice University. Joe’s supernatural thriller The Darkness: Giger, Texas released in 2017. A second novel—The Light: Houston, Texas—and a collection of short stories that arise from the macabre will soon follow. 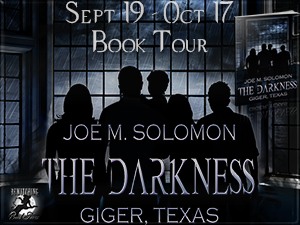