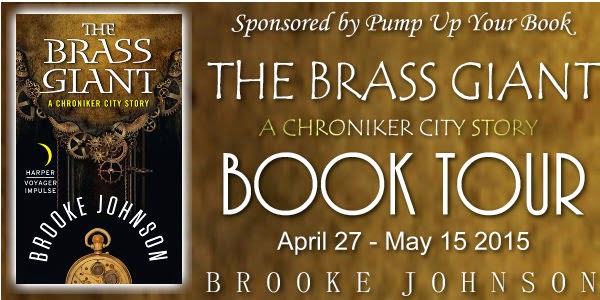 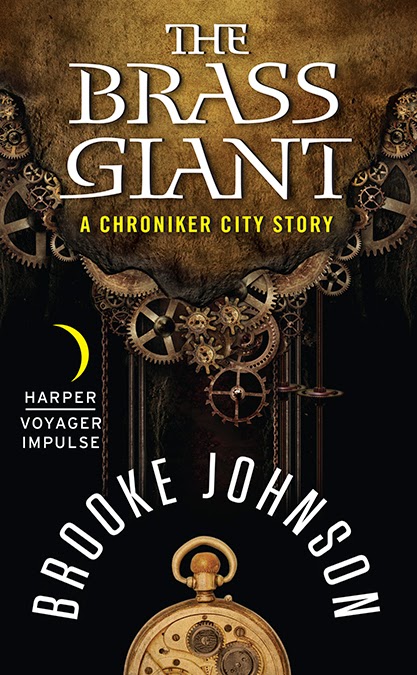 Sometimes, even the most unlikely person can change the world

Seventeen-year-old Petra Wade, self-taught clockwork engineer, wants nothing more than to become a certified member of the Guild, an impossible dream for a lowly shop girl. Still, she refuses to give up, tinkering with any machine she can get her hands on, in between working and babysitting her foster siblings.

When Emmerich Goss–handsome, privileged, and newly recruited into the Guild–needs help designing a new clockwork system for a top-secret automaton, it seems Petra has finally found the opportunity she’s been waiting for. But if her involvement on the project is discovered, Emmerich will be marked for treason, and a far more dire fate would await Petra.

Working together in secret, they build the clockwork giant, but as the deadline for its completion nears, Petra discovers a sinister conspiracy from within the Guild council … and their automaton is just the beginning.

To Purchase The Brass Giant


Guest Post by Brooke Johnson:
Why I Love the Heroines of Victorian Steampunk


When people think of steampunk, they usually think of the Victorian Era—bustles, corsets, rose-tinted glasses, gas lamps, parasols, and da Vinci-esque contraptions made of clockwork and steam—and for good reason. The romantic flair of nineteenth century Victorian Britain is the steampunk genre’s bread and butter.

Gail Carriger, Viola Carr, Cassandra Clare—the talented ladies of modern steampunk—all set their novels in the prim and proper sociopolitical atmosphere of Victorian England, with daring heroines who face all manner of dark creatures and fouler machines in the pages of their books. There’s a certain romantic quality to a strong-minded woman trying to make her way in man’s world, with sensibilities more fitting for the modern world than the straight-laced rigors of nineteenth century society—and yet, still relevant in the lingering patriarchal society of today.

Here are women who are far more brave and clever than those of us who read their stories. They inspire us to do better, to be better, because for all our troubles as women in the world today, the heroines of Victorian fiction have much greater obstacles to face than we do—vampires, werewolves, government, and conspiracies excluded. Their problems are the same as ours: the trivialization of all things feminine, the disregard for women’s rights, the inequality between genders, the expectations of beauty, and the male gaze. For all our “social progress” since the 1800s, these same problems are relevant even today, and seeing these steampunk heroines act against the injustices of their time, however small their actions may seem, or how insignificant their accomplishments are in the grand scheme of things, they are not willing to sit by and let things continue as they are. They seek to change the world, to carve a place for themselves in a world where they are looked upon as the inferior sex.

It’s inspiring to read about their journeys, to see a part of ourselves in those characters and connect with them through their trials. Through them, we can dare to dream, dare to hope, dare to aspire to greater things.

That was my goal when I wrote The Brass Giant. The main character of the novel is a young female engineer who is forbidden to join the Guild—an exclusive brotherhood of engineering elite—for no other reason than the fact she is a girl. And yet, despite that, she tries anyway, going so far as to risk treason to get one step closer to seeing her dreams realized. In a world where all the odds are stacked against her, she doesn’t give up, and to me, that’s admirable—even if it does get her into loads of trouble.

So, why do I love the heroines of Victorian steampunk? Because they are stronger, braver, and cleverer than me. They inspire me to be a better person, to stand up to the injustices of the world and make this world, this time-period, a better place for the generations to come—even if all I ever do is put pen to paper. I can only hope that my words inspire a young girl to dare to follow her dreams, to be unafraid of what the world may throw at her, and to show her that she deserves a place in the world just as much as any man. 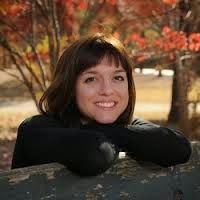 Brooke is a stay-at-home mom, amateur seamstress, RPG enthusiast, and art hobbyist, in addition to all that book writing. As the jack-of-all-trades bard of the family, she adventures through life with her fiercely-bearded paladin of a husband, their daughter the sticky-fingered rogue, and their cowardly wizard of a dog, with only a sleep spell in his spellbook.

They currently reside in Northwest Arkansas, but once they earn enough loot and experience, they’ll build a proper castle somewhere and defend against all manner of dragons and goblins, and whatever else dares take them on.

Visit her at the following locations:

Brooke and Harper Voyage Impulse are  giving away a $25 Gift Card!