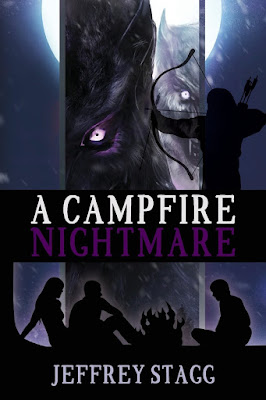 IN AGES PAST, the Flathead Native Americans fought a war against a monstrous force that stalks the woods surrounding Flathead Lake. So says William Rox, legendary musician and director of the prestigious Colman’s Amateur Music Program, known as CAMP.

Jimmy Downs is thrilled to be attending CAMP—or he would be, if he weren’t being bullied by campers who seem to think wealth can buy talent. Jimmy doesn’t have money, but he can drum like no one else. As for the bullies, at least his best friend, Michael Munday, is with him. The two have had each other’s backs all of their lives.

But bullies are about to become the least of Jimmy’s worries. Dark, hulking figures begin surrounding the woods around camp…figures that bear more than a passing resemblance to Rox’s campfire stories.

Jimmy and Michael are about to become players in a very old war—assuming they survive.

PROLOGUE
The black-cloaked figure knelt by the lake, examining the muddy soil. A great northern storm had rolled through hours ago, but the air was still frigid. Waves crashed against the stony shore, waterdrops splashing up against his waterproof black covering.
His fingers traced along the print clearly pressed into the mud. It was a large paw print, something like the shape of a wolf’s but the size of a bear’s. He examined the mark on the ground and then moved to where he should have found the creature’s front paws, but not surprisingly, he instead found what appeared to be humanlike handprints, with long, triangular fingernails jutting out from the tip of each finger. The cloaked man placed his own right hand within the print, knowing that the muddy outline was easily twice the size of his own pale hand.
His left hand tightened around the shaft of his bow as he stood up.
Even though it was nearing one in the morning, his eyes clearly made out the many prints that had been made throughout this particular clearing.
He had warned the other guardian that something was going on.
“Why so many?” the man asked aloud as he pulled down the hood of his cloak. “There shouldn’t be this many here anymore.”
“What’s that?” a British man’s voice called from the darkness.
A flashlight’s beam bobbed through the trees, weaving back and forth until it fell upon the pale man’s form. The man lifted one of his hands to block his sensitive eyes from the somewhat dim beam. He indicated the soil in front of him that marked the passing of their quarries.
“A pack,” the pale man told his companion, moving the tip of his weapon to indicate how many individual creatures had passed through there. “You should keep the camp closed this year.”
“No,” the huge British man answered, snapping his response a little more testily than he had wanted. “It needs to be open. You know just as well as I do that we need to stay open.”
“Even at the risk of the lives of hundreds of people?”
His companion stepped forward and jammed a double-edged longsword into the ground as he examined the pathway. The flashlight was a head lamp, mounted with a pair of bands that wrapped around his head. As his head shifted from one set of prints to another, a feeling of anger began flooding into his soul.
“I need you to thin out this pack. You can shoot the sods from afar, and with that horse of yours, you’ll be able to stay ahead of them.”
“I can do that,” the pale man agreed, pulling his hood back up, still watching the back of the big man.
“There’s something going on this year that we don’t understand quite yet,” the British man told his friend, standing up and pulling the sword from the moistened ground. “Something feels different. It feels wrong…and right at the same time.”
“Maybe the legends are true, and the natives’ stories are coming to pass,” the archer suggested, beginning to stroll into a particularly dark portion of the forest, his fingers tightening on the dark wood of his bow as he disappeared into the night.
Finding himself alone, the swordsman stood and peered up into the sky at the bright round moon hanging in the air, twinkling stars engulfing the night. This was Big Sky Country, and it was true to its name. His eyes searched the heavens, hoping that an answer would reveal itself.
He let out a huff of hot breath, and the air clouded before his flashlight dimming the light slightly.
Shaking his head and turning to stare at the spot where his companion had disappeared, he whispered to himself, “I hope not. We’re not ready for them yet.”
As his words disappeared into the night like his breath, a clear rumbling sound thundered through the night on his left. Reaching down slowly, he drew his sword once more, its silver blade sparkling with the light of the moon.
“God above, keep me safe that I might be able to open the camp.”
The rocky growl turned into a mix of a scream and a roar as the furry eight-foot monstrosity leaped at the man, humanlike hands reaching out with razor claws. Swinging the sword out wide, the man pivoted to meet the demon in the darkness. 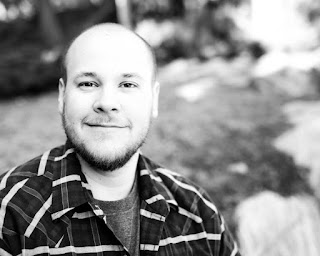 Born to a podiatrist from Utah and a rancher's daughter from Montana. Stagg was able travel throughout his childhood finding solace and inspiration in the wild.
His interest in nature has made Stagg realize that the melding of natural world with magic was where he could excel. To keep ideas alive, Stagg is an avid nature photographer, imagining book scenes wherever he travels.

While attending Weber State University, Stagg was able to work as an artisan cheese maker for the award winning Beehive Cheese Co. in Ogden, Utah. It was there that the details of A Campfire Nightmare came together. During the 5 years he was employed at Beehive, Stagg has created story lines for many series he is in the process of writing.

Now, Stagg works as an educator and works with students in reading and writing. Encouraging those around him to spend more time in books.