Book Blast: In The Company of the Dead 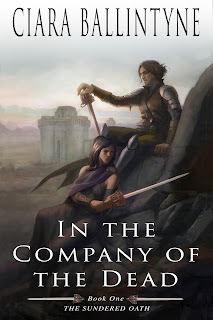 In the Company of the Dead
by Ciara Ballintyne

Ellaeva’s obligations to the death goddess leave her no time to hunt down her parents’ murderer—until both duty and revenge lead her to the lonely castle where Lyram Aharris has been exiled for striking his prince. As the castle falls under siege, Ellaeva and Lyram must fight to save themselves from political machinations and clashing gods—but the greatest threat comes from an unexpected quarter.


Only a fool would split hairs with a god, least of all the goddess of death, but Ellaeva would count herself such a fool and consider it worth it—if she could get away with it.

She leaned across the knife-scarred timber of the tavern table.

“Are you sure?” she asked, her tone even and barely loud enough to be audible over the noise of the flute and the zither. Her work on behalf of the goddess Ahura, adjudicating the small war here in Dayhl, could only be abandoned in favour of a greater threat. If she was going to chase off after the man who killed her parents, she needed to be sure her arguments stacked up. The pursuit of personal justice wouldn’t be enough.

Is it justice or revenge?

No time to worry about that now. She tugged her black hood farther down over her infamous face, even though deep shadows blanketed the common room corner. She’d chosen a table far from the tallow candles mounted in their stag-horn chandeliers. There was no point taking chances; the black hair and porcelain skin of a Tembran would be remarked here among the platinum-haired Dayhlish. Besides, someone might recognise her.

“In Ahlleyn, sure as the spring comes after winter, Holiness.” The narrow-faced man across from her grinned, baring teeth more brown than yellow. The acrid smoke from the candles didn’t cover his pungent breath.

She half-stood, making an urgent, negating gesture as she glanced around, but the hubbub of chatter from the patrons and the music covered his slip. No one even glanced their way. On the far side of the room, away from the two blazing hearths, tables were pushed aside for dancing. She dropped back into her seat, her black robes fluttering around her booted feet.

Ciara Ballintyne grew up on a steady diet of adult epic fantasy from the age of nine, leaving her with a rather confused outlook on life – she believes the good guys should always win, but knows they often don’t. She is an oxymoron; an idealistic cynic.

She began her first attempts at the craft of writing in 1992, culminating in the publication of her debut work, Confronting the Demon, in 2013. Her first book to be published with Evolved Publishing is In the Company of the Dead.

She holds degrees in law and accounting, and is a practising financial services lawyer. In her spare time, she speculates about taking over the world – how hard can it really be? If she could be anything, she’d choose a dragon, but if she is honest she shares more in common with Dr. Gregory House of House M.D. – both the good and the bad. She is a browncoat, a saltgunner, a Whedonite, a Sherlockian, a Ringer and a Whovian… OK, most major geek fandoms. Her alignment is chaotic good. She is an INTJ.

Ciara lives in Sydney, Australia, with her husband, her two daughters, and a growing menagerie of animals that unfortunately includes no dragons.


Ciara will be awarding a $20 Amazon or B/N GC to a randomly drawn winner via rafflecopter during the tour.