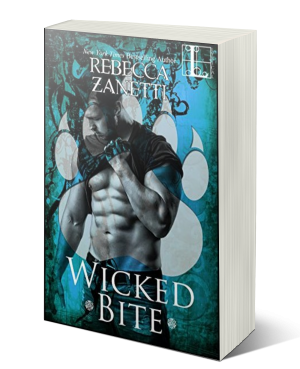 If you love the Dark Protectors, these wicked hot Realm Enforcers are for you!As she hunts for a drug lord killing her fellow witches, all Tessa Lansa’s instincts point to the Grizzly motorcycle club. That might be because their leader, Bear, is the strong, silent shifter type: warm brown eyes and more muscle and alpha male than any woman can ignore. Which makes Tessa’s plan to seduce and betray him all the more dangerous . . . Bear doesn’t trust the curvy, blue-eyed witch. But Tessa can heal the injuries that sap his strength. And since he can’t stop thinking of her lush body and teasing smile, her plan to mate him to reclaim her own power is highly tempting. Just one problem. Once a desire this wild is loose, no one will ever control it . . (Goodreads)

This is my first read from Rebecca Zanetti but it won't be my last. Wicked Bite is part of the Realm Enforcers series but functions well as a standalone if like me you haven't read the other books in the series. I was only confused in a couple of parts but the author does a great job of explaining backstory from the other books in the series so I wasn't completely lost by any means.

Bear is the Alpha of the Grizzles, a shifter MC. As a result of his actions in a previous book Bear is dying from the inside out. He's loosing his strength and slowly he is loosing his life. Bear still has a lot to live for but there is little hope of curing what ails him except a strange witch who claims to have the ability to heal him. Nessa is a unique witch. She doesn't have the same abilities as other witches, her ability is one of a healer. However that ability has made her a target so she suggests a deal to Bear, she will heal him and give his life back to him if he will agree to mate with her. Untrusting of witches in general because of their many secrets, Bear must decide if he wants to live bad enough to trust the little witch.

Like all witches Nessa does have her secrets, she was sent undercover to discover if Bear's MC is dealing a drug that is killing witches. What she uncovers is a conspiracy that not only may tear Bear and Nessa apart but may cost her her life.

With a giant plot twist you probably won't see coming Rebecca Zanetti has earned a fan in me.