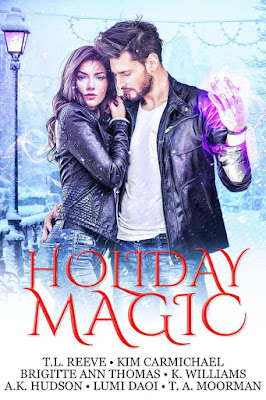 Holiday Magic
A paranormal and contemporary holiday romance anthology
By: TL Reeve, Kim Carmichael, Brigitte Ann Thomas, K. Williams, A.K. Hudson, T. A. Moorman, and Lumi Daoi
Make this winter magical with 7 BRAND NEW Holiday romances.
This Holiday Season SEVEN amazing, talented, and bestselling authors come to together to bring a collection of Holiday Magic with vampires, witches, shifters, and humans.
'Tis the season for a little paranormal and contemporary romance with a touch of magic everyone will fall in love in with.

https://books2read.com/u/mdN6G5
http://bit.ly/2zWzwpE
A look inside…
Snowbound by TL Reeve
Eight Nights in Eden by Kim Carmichael
I Loved a Warlock from Wichita by Brigitte Ann Thomas
Tarnished Knight by K. Williams
Spark of Solstice by A.K. Hudson
Christmas with Locket by Lumi Daoi
Santa's Curse by T. A. Moorman:
What if Santa was a vampire?

Now that the town knows Jacquelyn is the one behind all of the disappearances, and thinking she’s killed all of those that are missing, they're out for her blood. And the only one who can save her is, well, Santa. But will he be able to make it back to her before it’s too late?
Enjoy a brand new tale of how Santa Clause came to be. 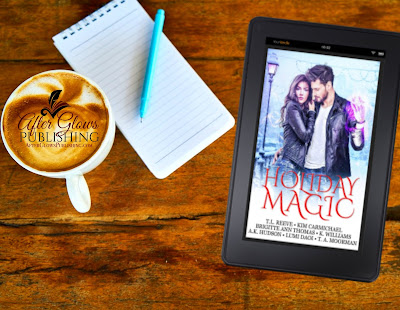