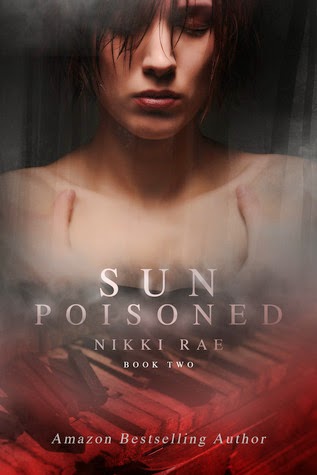 "Never judge a book by its cover, you may be disappointed."


Sophie’s life has changed. She’s moved to New York, she’s playing music for new people, and she’s making new friends. Then there’s Myles, and the fact that he is now her boyfriend—and everyone knows it.

She’s not exactly normal, living in a half-human, half-vampire world, but she’s finally, truly happy. However, some parts of Sophie and Myles’ old lives still hide in the dark, waiting for the right opportunity to strike.

Sophie’s having nightmares again, but they aren't about her; Myles is hiding something as well, something Sophie isn’t sure she wants to know.

And one lie will change everything.

No matter how hard she tries to cover up the marks her monsters have left behind, they never truly go away, and Myles’ monsters are no different.

Once again, Sophie’s caught between life and death, but this time, only she can save herself.  (Goodreads)

Book 2 proves to be better than Book 1, though not by much.  Not sure whether or not to like Sophie, hate her or not care about her one way or the other.  And there are so many aspects to this story that I am really not even understanding.  For one, why in the world does this girl sleep so much.  We're talking anywhere from 14 hours to 2 days.  And the cutting thing, I get it, I did it, but not at such a young age.  If it had began after her rape, that I may have been able to understand, it didn't.  This is coming from someone who has a mother who hates her, a father that was never around, molested at a young age and raped at sixteen, the same age Sophie was.  So yeah, I have room to talk, been there done that and all that jazz, and its not a subject I take lightly.  No worries though, all it took for her to stop was her boyfriend who's not really her boyfriend to tell her to.

Myles now knows about what happened with Jack, and to Sophie's surprise he sticks around.  He also moves her and her friends to New York to become a true band.  At least that's the story he gives her.  What he is really doing is putting them under protection.  Though even that doesn't ultimately stop Michael.  When there is a will there is always a way, and this time someone she loves will get caught in the crossfire.

Book 2 does have a little more action and is not as drawn out, but still gives the reader no answers.  It drags out the inevitable and makes one want to strangle the main character that much more.  Bringing in even more characters and raising more questions that never get answered, not even in the final book.  And Myles turns out to be a liar extraordinaire, the things he keeps from Sophie are things he has no right to.  Letting her believe Michael was dead is only the tip of the iceberg.

Book 2 could have used some more work, but it does at least flow just a tad bit smoother, and shows some of the characters with a little more depth.

On to Book 3...
No comments:
Email ThisBlogThis!Share to TwitterShare to FacebookShare to Pinterest
Older Posts Home
Subscribe to: Posts (Atom)