Review: Howl For It 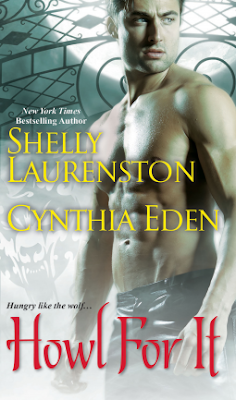 They hunger for your pleasure. They growl for your touch. And in these sizzling stories by New York Times bestselling author Shelly Laurenston and Cynthia Eden, these sexy wolf shapeshifters are lust at first bite. . .Like A Wolf With A Bone by Shelly LaurenstonQuiet little Darla Lewis couldn't be happier when the most-feared member of the South's rowdiest pack kidnaps her. A girl gets real tired of being overprotected by her own shifter family, and there's nothing like an oh-so-big bad wolf to start a pack feud, unleash her instincts--and have her surrender however and whenever she wants. . .Wed Or Dead by Cynthia EdenGage Ryder knew his human bride had a wild side. But spending their honeymoon night on the run from hunters out to finish him and his pack is sure not the kind of fun he was looking forward to. No problem--Gage will do whatever it takes to lay bare Kayla's secrets and find the truth. If he can keep from being captured by his own seductive game. . .

Howl For It by Shelly Laurenston
My rating: 5 of 5 stars


Howl For It is 2 books/novellas in one.

The first Book/novella is: Like a Wolf with a Bone by Shelley Laurenston

I wasn't sure at first ... this was set in the South and all of the Characters male Smith's had Ray as their 2nd first name or middle name (it is unclear which it is) & the Lewis sisters were all "first name" Mae's.

That said even the character written to be the least endearing will work his way into your heart.

Eggie Ray and Darla Mae were born for each other. Eggie Ray is more Wolf than man and Darla Mae is a pacifist Werewolf. Despite the fact that Eggie Ray would just as soon kill you as talk to you they seem to work ... maybe Darla Mae's amazing pies help as well.

There was action, strife, crazy families coming together (again! ) ... this book was fun to read.

Wed or Dead by Cynthia Eden is the second of the books/novellas.

This was my first Cynthia Eden book/story and it was good! It took me a few chapters to get into to it but in the end it was worth the effort!

Give this book a try if you want a good set of paranormal romance books/stories!

I volunteered to read the book as an Advanced reader copy and now I am writing my honest review of the book.

Reviewed by Jennifer of the GothicMoms Review Team