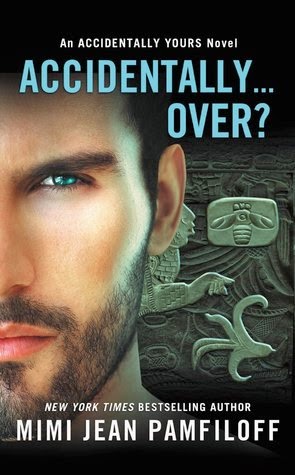 "Well, the series that accidentally became one my favorites has come to an end, or has it?"


The time has come for Cimil to pay for all of her crimes. As she sits back and enjoys her incarceration the question remains, will she be enjoying a giant bowl of popcorn while watching the apocalypse begin, or still attempting to prevent it? Or planning a giant hoopla to celebrate it? Her victim of the day is Maax, though it turns out she has been using him for a very long time. Though now he may finally get his reward, after he jumps through a few more fiery hoops.

Cimil sends Max on one final mission; to go back in time to save the only person able to stop the Apocalypse. No problem right? Wrong. There are a few catches; 1) Death has its eyes set on this mystery woman. 2) He must save her in her own time, as a mortal. 3) She has to stay in her own time. Easy simple tasks, if she hadn't turned out to be his. And saving her life seems to be a tasks even harder to accomplish than evading the end of the world. Oh, and he's still invisible. So what's a god to do when faced with such enormous tasks set out by a sister who is one of the craziest beings alive and always has something up her sleeve?

Ashli Rosewood is beginning to think she has lost her ever loving mind. Not only does she keep dreaming of her own demise, but the being she believes to be the god of death. Only instead of fearing him she lusts after him. Ever since losing her parents Ashli has felt not only the guilt of surviving, but that Death was out to get her. So when Maax steps into her life, she is more than sure he is there to end hers. But if/when she decides that may not be what he after, her world is turned beyond upside down.

In this final ride of the Accidentally Yours Series just may blow a gasket from laughing so hard, and be watching the ground closely for banana peels. Every answer to every question will finally be answered, and the full extent to all of Cimil's plans will be revealed. And we finally learn what the hell Jess, Ann and Nichole are!!!! See, I waited so patiently, as I am sure all of you did as well. This is a must read for any and all who have read the series.  Those of you who haven't, what are you waiting for? Full of action, not toooo much drama, laughter, mayhem, love and a whole lot of fun. Sadly, there isn't that much bloodshed in this final book, and I really would have loved one more bloody battle with all of the gods battling it out with the Scabs and Obscuros. But all of the dark humor did indeed make up for that. This series is for all readers, regardless of gender, that love their humor dark, deadly and sinister. And completely unpredictable, a truly unique read, which is a rare find these days. One will not be able to say, 'didn't I just read this same thing happening in a different book?' Really, I haven't heard of many invisible deities who were made in invisible as a punishment to a crime that wasn't even really a crime who could travel through time and do other very manly deeds.

So fans of Krestley Cole, Sherrilyn Kenyon and Kerrelyn Sparks, be sure to make this series your next read. And when you do, be sure to pick up the entire series at once. When reading this series, readers will not want to stop until they get to the very end.