Release Day Blitz: The Succubus, The Demon, & The Witch 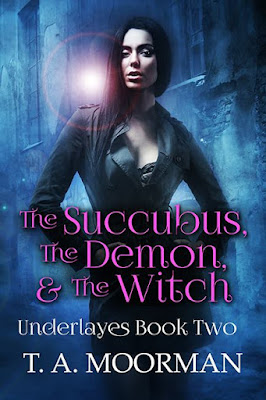 The Succubus, The Demon, & The Witch
By T. A. Moorman
Published by After Glows Publishing 3/27/2018
Paranormal/Supernatural

Blurb:
In Underlayes, a dimension separate from our own, where all mystical creatures reside, lies an orphanage for seemingly cast-off children, known as the Abbey. Children who are born from two or more factions. There they learn both who and what they truly are, and what powers they have lying within. What these children do not know is they were put there for their own good, for their protection, not because they were unwanted or unloved. In fact, the very opposite is true. Many would kill to get their hands on these children.

As Jelissa comes of age, she is about to learn the hard way to what lengths one such being is willing to go.

Jelissa has been a resident of the Abbey for as long as she has been alive. She has also never known what she is, besides being part witch. At the age of twenty-five, she will learn just what types of blood run through her veins. She will also find out much more—that she is also the long-lost princess almost no one even knew existed.

Tialanna secreted her only child away for her own protection. Before she can tell Jelissa the truth, Jelissa is kidnapped. All Tialanna’s greatest fears unfold before her very eyes, and her past comes back to haunt her in more ways than one.

As most do when they come of age, Jelissa will learn the hard way that adult life isn't all it’s cracked up to be. And Tialanna learns the hard way that if you don’t learn from your past, it will come back and bite you on the ass.

Tialanna and her band of unmerry misfits are in a race against the clock to rescue Jelissa. Will they find her in time? And if they do, will they be able to save her from a danger they hadn’t anticipated: herself?

Laina then did something she never would have done had she been in her right mind, but right then she was, as they say, high as a damn kite. She flashed herself down to the human dregs who had not volunteered to be donors. The ones who had spent their worthless lives preying on other humans; using, abusing, and some even murdering their own kind for nothing more than sport. Now they were the prey. Usually she never strayed down there because seeing any of their memories was the last thing she wanted, but she did hear talk of what each of them had done to end up in their predicaments.
This one in particular she had heard the female guard whispering about right before they had learned of the kidnapping of her cousin. This formerly arrogant, piece of shit human was much worse than just a womanizer, but a user and an abuser in the worst way. He preyed on single mothers who were slightly overweight, with self-esteem issues and a little bit of money, building up their confidence, making them fall madly in love with him while convincing them he felt the same way, tricked them into believing they would be together forever. He would even go so far as to include the children, acting as though he loved them as well and they were going to be the perfect family; even had the smaller ones calling him Daddy.
Then he would conveniently lose his job and begin asking for help with this and that, to the point where she was basically taking care of him. When the woman would begin to catch on that he really didn’t give a damn about her, he would start with slight insults, then the cheating and lying, then verbal and emotional abuse until she couldn’t take it anymore and ultimately dumped him.
The way he ended up down here was the last woman he had been with was part witch, and he’d treated her worse than all the others. He’d hurt her so badly her cry could be heard all the way in Underlayes by all the most powerful witches. Her aunt especially wanted him as a special treat, and to torture the Hel out of him. See, this halfling witch had fallen in love with him way before he became the lowlife he was, and he took full advantage of the fact. He swept her off her feet and moved her in with him, at first so they “could help each other out.”
When he lost his job, however, she became the main provider, just like all the others she had known nothing about. But, when she became impregnated by him, she could no longer work. And even though this child was indeed his without a shadow of a doubt, he still did to her what he did to all the rest: began treating her like a worthless piece of garbage once she had nothing left to give to him. He depleted all her savings accounts, played a major part in helping her to lose her job, even made her lose her car, and forced her to move back home with a family who openly hated her, with yet another child to raise on her own.
So Laina paid him a brief visit, not to feed, because she wanted none of his memories. No, this one she only wanted to make bleed and suffer. Flashing into his barren cave of a cell, with nothing inside it besides a chamber pot and stalagmite, she made quick work of stripping him down to nothing, moving so fast he had no chance to scream or even see his tormentor. She then began by ripping off the piece he held so dear and shoving it into his mouth before he could so much as whimper. Then she continued by tearing his skin to shreds, beginning with the face that gave females false hope and shattered dreams, then down to his chest. When she got to the arms that gave a deceptive sense of comfort and security, she ripped them off and threw them across the cell.
She made short work of him after that, saving his cold-ass heart for last, snatching it out of his chest even though he was already dead at that point, crushed the cold, no longer beating organ in her hand, and laughed like a rabid hyena as she did so.

When you become a Mom, you begin to put yourself last, and your combat boots begin to collect dust. Going to your child's PTA meetings in full Gothic, especially industrial, regalia is pretty much frowned upon. Especially by your own children, and your teens would die of a heart attack. But, one should not have to completely stop being themselves, uniqueness is greatness. All of that darkness is put into the words in her books, and designs in her jewelry sold in her GothicMoms DarkCharms shop.

Single mother of five beautiful children, but by far more than just that. T. A. Moorman is an artist, a former violinist, a seamstress, a crafter, a writer, a blogger, a reviewer, a dark confidant and a darkly dangerous, fiercely protective friend. And currently broke, so go buy something of hers. Lol.