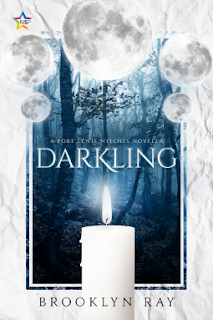 Port Lewis, a coastal town perched on the Washington cliffs, is surrounded by dense woods, and is home to quaint coffee shops, a movie theater, a few bars, two churches, the local college, and witches, of course.Ryder is a witch with two secrets—one about his blood and the other about his heart. Keeping the secrets hasn’t been a problem, until a tarot reading with his best friend, Liam Montgomery, who happens to be one of his secrets, starts a chain of events that can’t be undone.Dark magic runs through Ryder’s veins. The cards have prophesized a magical catastrophe that could shake the foundation of Ryder’s life, and a vicious partnership with the one person he doesn’t want to risk.Magic and secrets both come at a cost, and Ryder must figure out what he’s willing to pay to become who he truly is.CONTENT WARNINGS:Blood-letting (consumption of blood)Explicit Sexual ContentDeath and Resurrection of an MCMild Gore (very mild)

The writing was great. The only thing I had a hard time with was pronoun usage. But it becomes a bit clearer toward the end. More about gender identification. Once I wrapped my head around that, I was good!

Reviewed by Jen of the GothicMoms Review Team