Review: Of Fame and Fate 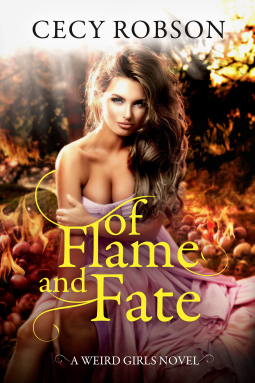 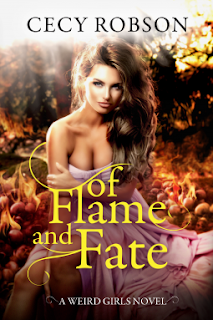 Taran Wird, who commands the power to wield fire and lightning, is an oddity in the supernatural world. But neither Taran nor her unique sisters compare to the bizarre entity known as Destiny. And Taran is assigned to protect her.Born of two witches, Destiny is revered among the supernatural elite for her acute ability to predict the future. Her biggest prophecy involves Taran’s sister, Celia, whom Destiny decreed will bear children strong enough to take on the evil that’s rising. Yet Destiny is not alone in her predictions, or individuality.When Johnny Fate, a rock star among humans and a male version of Destiny is discovered, his powers and Destiny’s clash, triggering the start of Destiny’s demise and altering the fate of Celia’s unborn children.Taran, her werewolf lover Gemini, and their allies must determine if it’s Fate who will decide what will become of Celia’s children, or if their lives and the world will perish with Destiny. (Goodreads)

I read Cecy Robson's first book in this series a couple of years ago. I read the next two as fast as I could. Then every time the next book released, I ordered it and read it within a day. There was a lag between a couple, and I found a few other series, and I lost track of this series. When I came across the chance to review this book, I realized there were two books I had not read. So I quickly read those two, so I could catch up in this series. I think this book CAN be read as a stand alone, but it is a lot better if you read the whole series or at least the two books right before this.

The women in this series are as kick-ass as any I've read. The spotlight is on Taran in this book. She struggles with accepting that unconditional love is not only possible, but she is worthy of it.  The passion she feels for Gemini is strong, and it will help her through anything if she remembers to trust and rely on it. Robson has created such life-like characters I feel a strong connection and would totally take them all out for a beer if I could.

The fast-paced action pushed me to read "just one more chapter" until I finished it. The world building is so solid; it was easy to SEE this book as if I was watching a movie.
No comments:
Email ThisBlogThis!Share to TwitterShare to FacebookShare to Pinterest
Older Posts Home
Subscribe to: Posts (Atom)