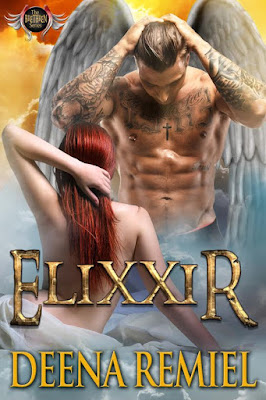 Blurb:
Callie has secrets, too many to count. For twenty years she's been living a lie as Callie Worthington, hiding from the monsters who brutally murdered her parents for possession of the Elixxir of Life. Unsuccessful before, their killers have found her and will stop at nothing to acquire the Elixxir. And see her dead.

Nathanael has a couple of secrets, too. A nasty one in particular blurs the line separating Good from Evil. As an immortal Brethren Warrior, though, he must retrieve the Elixxir before it falls into the wrong hands. Just how he's going to get it out of Callie's is the big question.

Tempers flare as Callie and Nathanael reach out to each other with their own hidden agendas. She needs his protection. He needs the Elixxir. Will their fiery passion lead to lasting love, or will their web of intrigue ultimately destroy them both?

Deena spends her time playing in the Garden of Good and Evil as she writes fantasy, paranormal romance, and suspense. She’s been known to have downed a few beers with her angels, and even put Satan in his place a time or two. She’s fascinated with the concept of immortality and all its implications. Gilbert, Arizona, near her beloved Superstition Mountains, is where she and her family call home.
Author Links:
http://www.deenaremiel.com
http://www.facebook.com/deenaremielauthor
http://www.twitter.com/deenaremiel
http://www.pinterest.com/dremiel
https://www.goodreads.com/author/show/4627184.Deena_Remiel
http://amzn.to/1sqbAqA

“They don’t make baggy jeans anymore, Nate! Now come on—” Callie flew her hands up. “This is the tenth pair I’ve tried on. I’m picking one and taking it. Enough is enough. It’ll be midnight before we make it to the station at the rate we’re going.”

“Then I’ll get you a bigger size and a belt. That’ll make them baggy and saggy. Perfect for blending. What size are you?” She gave him a look of death. “What? Just tell me so I can get you a bigger size. I promise I won’t tell anyone.” She raised six fingers. He turned and went to the jeans rack to pick out the larger size.

She sighed and took the pair into the dressing room. When she came out she looked miserable. He smiled. “See, that’s what I’m talking about.”

“Great, glad you’re happy to see me looking so frumpy.”

She’d pouted so adorably, it took him by surprise. She trudged back into the dressing room. He couldn’t help himself, and took a quick look around. Seeing no attendants nearby at the moment, his adventurous side had to follow. He moved the dressing room curtain aside and stepped in, drawing it back around him for privacy.

“Hey! What do you think you’re doing?” She swung around and whispered vehemently.

He towered over her, backing her up against the mirror and put one hand on either side of her head. Careful to leave only enough space so their bodies wouldn’t touch, he looked her straight in the eyes and whispered back. “For your information, you would look sexy as hell in a potato sack, and still do in those jeans.” He winked and left as her jaw dropped.

What the hell was that all about? Did he do what I think he did? Damn. The man just came on to me! Anger warred with arousal as she tore the tags off her new clothes and collected her things from the bench. She whipped the curtain open and stormed out toward the cashier’s counter where the insufferable oaf leaned nonchalantly.

She gave the tags to the salesgirl, smiled, and turned to him, speaking in a hushed but intense voice. “You and I are gonna have words when I’m done here.” She heard him snort as she turned back to the girl and smiled, paying for her clothes, but paying him no mind. Grabbing the plastic bag with her own shorts and top inside, she marched past Nathanael and out the door.

“Have a great night!” an oblivious saleswoman called out to her. She waved her off with a grunt and a “Whatever.”

She watched as the overly-confident Neanderthal sauntered out of the store and headed straight over to her. Even though they were outside, he seemed to take up all the usable space in the immediate vicinity.

“I got plenty for you, Nate.” She poked his chest, trying to push him back a bit. “Wanna hear some? How about, you’re a jerk for walking into my dressing room without permission? How about, what the hell was that back there, asking my dress size and calling me sexy as hell? How about—”

Her next words were gobbled up by a hot, urgent mouth pressed against her own. Strong hands held her shoulders, guiding her closer to his body as he deepened his assault on her lips. At first, she didn’t know what to do. He’d shocked the hell out of her with his aggression. She couldn’t help noticing some of her protective walls had been torn asunder, and well-guarded ramparts were crumbling. Eyes that at first had flown open wide were now fluttering closed as her mind claimed temporary insanity.

She gave in. Her hands crawled up his stomach to his chest and on up to his face, where she held him and retaliated with her own brand of attack. Their tongues, like swords, thrust and parried while she let her hands roam onward through his thicket of wavy black hair.

A horn blared, bringing her back to reality and the cracked sidewalk where she stood, with lips being molested by a beautifully dangerous man. Not again! I won’t fall for another employee of Brethren Security! She ripped herself away and stepped back. Breathing heavily, she shot him a look she hoped would convey death if he so much as moved an inch toward her. In case he wasn’t good at reading signals, she raised her hands to stop any forward advance. To his credit, he looked possibly even more stunned than she, and stood his ground.

“I…I’m sorry. First, you were looking all pouty, and then you were in my face all angry, and I don’t know what came over me.” He raked a hand through his hair.

“You don’t know? Well, I’d hate to see what you’d do when you do have your wits about you.”