Review: Zelle and the Tower 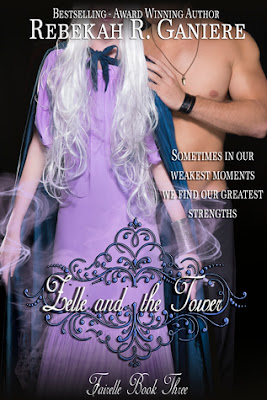 "Never have I heard the story of Rapunzel told in a more unique way, and I double dare anyone to try and climb her hair." 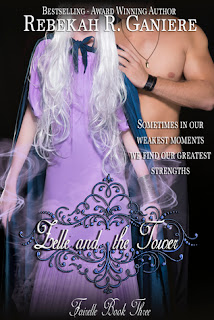 Sweet and naïve Rapunzelle possesses a dangerous and powerful magick. Her entire life has been spent in a mage tower built by her father, to keep her safe. Or so she's been told.

Flint Gwyn has spent the last six months wandering Fairelle, wanting nothing more than to wash away the pain of letting family down. Between drinking and women he plummets in to despair, with only Dax the werebear to keep him from getting himself killed.

When Flint and Dax stumble into Zelle's tower while running from a dragon, she finds herself drawn to Flint in a way that awakens startling memories she cannot place. And the longer he stays, the closer she comes to losing her heart.

Unable to control his feelings for the lonely maiden who brings him peace for the first time in his life, Flint fights to release her from her prison. But in doing so, he may very well bring down the wrath of an evil that's plagued Fairelle for a hundred years. (Goodreads)

Admit it, every time a childhood Fairy tale is retold, there is a little voice in the back of your minds that screams rather hysterically "AGAIN?!", before opening the cover. When reading the first few chapters that skepticism kind of stops some, like me, from even enjoying the book. With this one, and very few others in this particular category, even while that voice screams so loud it gets hoarse, the author continuously grabs a tighter pull on you, dragging you in until that voice finds the strength to scream "GIVE ME MORE!". This is very much one of those books.

Living in a tower for her own "protection" and that of others', Zelle is rather content with her life. Her birds as her friends, and a loving father who ensures she hurt no-one by draining her deadly magic to keep Zelle and everyone else safe, never had she had a doubt as to why things were the way they were. Never questioning his love or his motives, until two men happen across her tower, and stumble into it. Men who were not exactly as they seemed; one a werebear, the other a vampire hunter. The more time she spends with these men from the outside, the more she questions what she thinks is real. And the more she craves to see the outside world for herself, there is one man, Flint, that she begins to crave just as much. What's more is not only is he awakening seemingly foreign desires within her, her true memories begin to resurface as well. And realizes that naive little princess she is not, rather something far from it.

After having his sister turned into the very thing he hunted, Flint was ready to throw in the towel and give up on life, and everyone in it. Including, or rather especially, his very own family. His head and his heart are in utter turmoil with each other; the sister he once loved vs the creature she has now become. As with all things there is no such thing as black and white, there is also no such thing as truly evil or truly good, only various shades of gray and rather dubious shades of right. Something he is going to have to learn to come to terms with or he will not only lose his family, but the woman he is quickly coming to love as well.

Separately, they each have issues to work out; one their very inner demons, the other their inner and outer demons. Something they will have to do quickly with the troubles they are about to face. Danger is fast approaching them from all sides, and what they see as their weaknesses are what truly makes them stronger than they know.

While this may be a slow moving story in the very beginning, once it get moving it's a nonstop train ride that readers will be more than happy they boarded. With a heroine that can truly hold her own. With surprises coming from every page turned, this is the best retelling of Rapunzel that I have ever read. While this book can be read as a stand alone, do not cheat yourself, as I did, by not reading the first two books in the Farielle series first.
No comments:
Email ThisBlogThis!Share to TwitterShare to FacebookShare to Pinterest

GothicKids Movie of the Month: March, 2014 Instead of a Movie, we picked a show.  One that has had Vanessa and I running around the house screaming, dancing and cackling about all week. Once Upon A Time!  One of the very few series that I am sure would have the Borthers Grimm smiling.  Not many television shows peek my interest enough to even try to watch. This one me and Nessa watch together faithfully.  So grab your GothicKids and enjoy the show.  It will be on tonight, introducing the Wicked Witch of the West.  And if you have Netflix you can catch up on the prior seasons as well.


No comments:
Email ThisBlogThis!Share to TwitterShare to FacebookShare to Pinterest

The Dark Huntsman by Jessica Aspen
Book 1 of Tails of The Black Court
Published October, 2013 by Abracadabra Publishing
4 Mystical Stars


"I just love it when Fairy-tail's are brought to life and given a dark twist."


Read more »
No comments:
Email ThisBlogThis!Share to TwitterShare to FacebookShare to Pinterest

This just in, there are more dolls!! ARGH!! Ever After High featuring the Royals and the Rebels.  Of course, my daughter loves the Rebels.  These are NOT the same as Monster High, whole 'nother category all together.  As opposed to Monster High being the children of the monster's most of us grew up with and loved, these are the children of all the fairytale characters' the other kids loved, PLUS the children of the "bad guys", who I still say were just misunderstood, characters' as well.  Click here to visit the site.


Read more »
No comments:
Email ThisBlogThis!Share to TwitterShare to FacebookShare to Pinterest

Snow White and the Vampire Review


"While this book had SO MUCH potential, it failed to live up to my expectations."