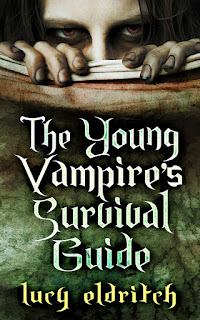 Within a month of being bitten, it cost the life of Robert James' best friend. Within a year, hundreds had died. All because of him.

Until he was bitten, Robert James was a regular college student. Now he seems to be the reluctant future of vampire kind and his world has been turned upside down. Pursued by the Dawn Warriors - a group dedicated to cleansing the world of evil - Robert's survival is at stake. Literally.

My eyes narrowed and I hissed, "How did you know about the note, Pixie?" My voice was low and menacing. I didn't even look at her, just dug my fingers into the upholstery of the seat to keep the boiling rage inside me from spilling over.

I reacted without thinking. Reaching across, I placed a hand on her arm. "It's OK," I said, "it's OK. I believe you. I'm sorry."

Pixie inhaled deeply and let out a slow, steady breath. When she spoke again, she was back in control of her emotions. I wished I could have said the same thing.

"They hadn't felt that half-vampires were any threat until you came along. But now," she said, "they've realised their mistake. I overheard Tarrie telling someone your mother should be the first to die as that would send the strongest message."

As we pulled up opposite the house, I could see my mum talking to Mrs Harewood from next door, who was busy pruning the hedge that divided their properties. My heart leapt.

I hurled a twenty pound note at the taxi driver, half-dragged Pixie out of the car and tore across the road. My mother broke into a beaming smile when she saw me and opened her arms to greet me.

At that moment, I thought we'd made it in time. We hadn't.

I’m Lucy Eldritch and I write paranormal-horror-urban-fantasy-vampire fiction set mainly in Manchester (the one in the UK, not the one in New Hampshire) and London. I also love red wine, but I suspect that’s not really something I should mention. Not professional. Something like that. So, consider it un-mentioned.

Lucy Eldritch will be awarding a $15 Amazon or Barnes and Noble GC to a randomly drawn winner via rafflecopter during the tour.