Review: His Witch To Keep 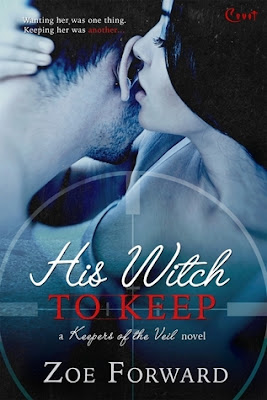 "One can ignore fate for only so long, especially when chemistry is also involved." 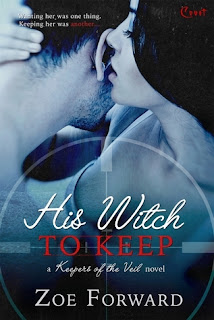 A paranormal category romance from Entangled's Covet imprint...Wanting her was one thing. Keeping her was another...Serenity Danssaert was already in way over her head. Not even her MI6 training or her powers as one of the seven Pleiades witches is going to save her sister. Then Alexi Jovec shows up. A secret operative working for unknown forces, he's impossibly sexy and dangerous...and the guy who bailed on Serenity after a red-hot, racy night.So bonding to him as her destined--the One--is so very wrong.While Alexi's need to own Serenity--body, soul, and beyond--is nearly unbearable, it's also forbidden. He's the last man who could ever be her destined. Besides, Hades's right-hand man cannot bond with a chosen Pleiades witch. He may be the one man who can protect her, but she can never be his to keep. (Goodreads)

Zoe Forward does not disappoint with this second installment of the Keepers of the Veil series. His Witch to Keep may even prove to be better than the last. She nails that critical point within a series of where information on the background is too much and not enough and got it perfectly on the nail. So much so that this book can even be enjoyed as a stand alone read, but, enjoyed so much more after having read book 1, Protecting His Witch.

Serenity has all of the problems that come with being a Pleiades witch and then some. A former undercover agent with the fate of the world on her shoulders, she also has to deal with a kidnapped sister, and a lethal killer hot on her heals who she has the hots for is nothing more than another day in her life. That is until she continues getting slapped in the face by one big reveal after another, each one more shocking and more damning than the last. The one she simply can't wrap her head around is big, tall and extremely dangerous. When all signs point to him being the one, she can't possibly believe it to be true, especially after finding out that there are other God's at play, and he's descended from one of them.

Alexi has been stalking Serenity ever since their one night stand together, and not just because he wants to boink her again. His feelings run far deeper than that. Being taught all of his life that he is not the one in his family to be allowed to settle down with any woman, his soul purpose to be Hades right hand and nothing more, he has come to terms with that. Sort of. After all, he is only stalking her to insure her well-being. At least that's the lie he keeps telling himself. That's not even his biggest problem. The next victim on his list brings things far too close to home, and the ties are tightly connected to Serenity.

A love that was not made overnight and well worth the wait, a heroine that can most certainly hold her own, and two people who respect one another and neither trying to change the other. Non stop action from one page to the next with surprises and tons of fun along the way, His Witch to Keep is definitely a must read.
No comments:
Email ThisBlogThis!Share to TwitterShare to FacebookShare to Pinterest
Older Posts Home
Subscribe to: Posts (Atom)