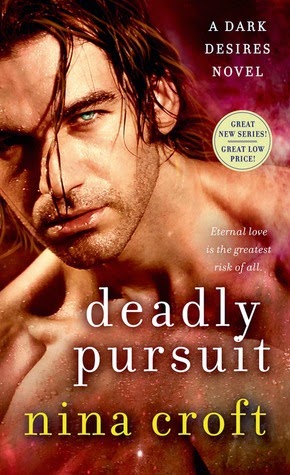 "A mystery, a comedy, a sci-fi fantasy and a passionate love story all rolled into one."

He craves his own freedom.

Jonathon Decker knows how to keep his enemies close—and his allies closer. But what about his women? Everyone wants a piece of the world’s sexiest werewolf, now that he’s been broken out of prison. Enter Alexia, the High Priestess of the Church of Everlasting life. Captivating and independent, Alexia is everything Jon could want in a woman. But can she be trusted? It will take more than one night of endless passion to find out…

And she is his to possess…

After twenty-four years of faithfully playing by the rules, Alex is finally ready take fate into her own hands. Her passion for Jon is a force to be reckoned with—and the way he makes her feel keeps her coming back for more. But their desire could lead them both down a dark path—one in which there’s no turning back. How much will each of them risk to be together…for all time? (Goodreads)

The perfect blend of science fiction, paranormal and romance, and enjoyable by any gender. The greatest books are the ones that make readers stop and think, what if? Nina Croft proves with each book in this series that she truly understands that concept. Creating a world after the earth has been destroyed, and showing that mankind still lives on, and survival of the fittest still applies.

High Priestess Alexia the entirety of her life living under the rule of others. While being doted upon hand and foot, she was also sequestered to a glamorous life of servitude. Told what to wear, how to talk, how to behave, more importantly, how to think. When she finally sees the opportunity to break free, even if only for a short while, she jumps on it, or rather in. Taken in by the Captain of El Cazador Alexia assumes a new role in life, as well as a new gender becoming Al the cabin boy. But good things must come to an end, as Al learns with bitter clarity as the Church learns of her whereabouts and demand her return.

An alpha werewolf without a pack to protect can be a very dangerous thing. Jon cannot forgive himself for the events that tore his pack apart. Becoming a lone wolf and an assassin seemed the only solution for him. But the moment he meets the "cabin boy" his world is turned on its axis as every instinct he has comes back online, no matter how much he tries to fight the pull. The wolf and the man may want the same thing, but the man is determined to resist.

One determined to live a full life in a short time, the other still running from the life he once lead. Together they can either be each others downfall, or salvation.

Full of non-stop action from beginning to end, plus a bonus scene at the end, the Blood Hunter series is a true must read. Both male and female lovers of sci-fi and paranormal alike will enjoy this read. Characters to love, characters to hate and characters to make you laugh. Not for the squeamish or faint of heart as there is violence, bloodshed and steamy, hot sex that will have you reaching for your lover and making them very happy. This is a re-publish, so for those who have already read it, here's your chance for an actual paperback, so that you may have both Jon and Rico right at your fingertips.
No comments:
Email ThisBlogThis!Share to TwitterShare to FacebookShare to Pinterest
Older Posts Home
Subscribe to: Posts (Atom)