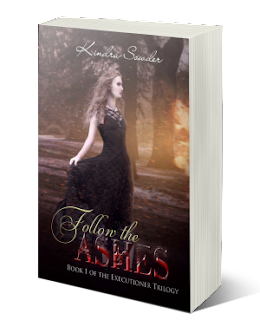 
What does it mean to be the Executioner?
Is it the struggle between good and evil, and the fulfillment of a Gypsy legend?

For Robin, it’s simply another day in the park in downtown LA. It’s killing the undead as she attempts to juggle life and love the same as any other ordinary woman would. That is until she meets Gordon, a crazed demon with a conscience. Now she must battle an ancient evil far more powerful then she’s ever faced before, or risk losing the world to Lilith, the mother of all vampires.
Will she save mankind? Or will we all follow the ashes of destruction as we burn in Hell? (Goodreads)

Review:
The idea behind this book is a nice twist on the vampire hunter trope. I really liked the prologue because I feel like it set up the pace of the book and gave a cool hint as to what was going to happen next. I would have liked to give the author a higher rating, but it needs some more work to make it that perfect read. It does have potential for being an excellent series.

What I would like to see in the next book in this series is more character development, a lot more dialogue, and more detailed fight scenes. What can I say? I'm a woman of action, well, one that loves to read action scenes that make me feel as though the fight were taking place in front of my very own eyes.

I really think the author has a good backbone here, and would love to see it grow within the pages of the next book.