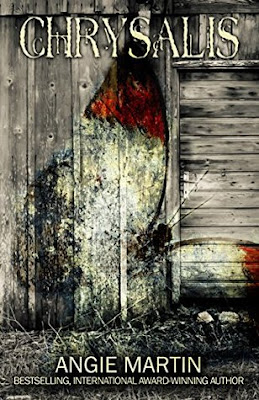 From the best-selling, award-winning author of Conduit and The Boys Club comes a new supernatural thriller. Sheriff Peter Holbrook leads a simple life watching over the residents of Nowhere, Kansas, where the most noteworthy crimes are dognappings and brawls at the local tavern. He’s always had an inherent fear of the gray – the yearly spring storms that plague the area. As the gray descends on Nowhere, a mysterious woman crashes her car just outside city limits. The tattooed stranger may not remember who she is, but Peter instantly feels a connection with her. But, the girl’s appearance isn’t the oddest event. Unusual behavior from the townsfolk, cattle mutilation, and death soon follow. Peter believes they are related, but only has his instincts and prophetic ramblings from his deceased mother. As the mysteries and bodies pile up, he turns to the stranger for help in hopes to save his sleepy town. Chrysalis contains strong violence. Reader discretion advised.

Chrysalis by Angie Martin
My rating: 5 of 5 stars


This book was awesome! Pulls you in immediately with a fast moving plot. I think this is a cross between horror and suspense with just the right amount of both.

Sheriff Peter Holbrook discovers something strange in his sleepy little town of Nowhere when he meets Kaylen. Kaylen was in an accident and now has amnesia. It's up to Peter and Kaylen to figure out what's going on before it's too late and there are more murders. This town may be in a heap of trouble when the gray comes.

I love a creepy thriller that keeps you up most of the night. But, hey, I'll keep coming back for more. I've read some great books and this is one I highly recommend. Kudos to the author for an unputdownable, riveting read.