Interview With a Villain: Christian A. Brown 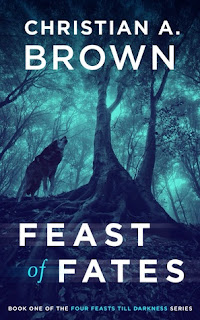 Morigan lives a quiet life as the handmaiden to a fatherly old sorcerer named Thackery. But when she crosses paths with Caenith, a not wholly mortal man, her world changes forever. Their meeting sparks long buried magical powers deep within Morigan. As she attempts to understand her newfound abilities, unbidden visions begin to plague her—visions that show a devastating madness descending on one of the Immortal Kings who rules the land.
With Morigan growing more powerful each day, the leaders of the realm soon realize that this young woman could hold the key to their destruction. Suddenly, Morigan finds herself beset by enemies, and she must master her mysterious gifts if she is to survive.

Morigan took the bracelet.
“I accept your offering.” The Wolf’s face lit and she thought that he would leap at her. “Yet first, I have a request.”
“Anything, my Fawn.”
“I would like to see…what you are. The second body that shares your soul. Show me your fangs and claws,” she commanded.
Perhaps it was the steadiness of her voice, how she ordered him to bare himself as if he belonged to her, that made the Wolf’s heart roar to comply. He did not shed his skin but for the whitest moons of the year, and even then, so far from the city and never in front of another. In a sense, he was as much a virgin as she. With an unaccustomed shyness, he found himself undressing before the Fawn, confused for a speck as to who was the hunter. The flare of her nostrils, the intensity of her stare that ate at him for once.
I have chosen well for a mate. She is as much a Wolf as I, he thought, kicking off his boots and then shimmying his pants down to join the rest of his clothing. No bashful maiden was Morigan, and she did not look away from his nakedness, but appreciated what she saw: every rough, hairy, huge bit of him. 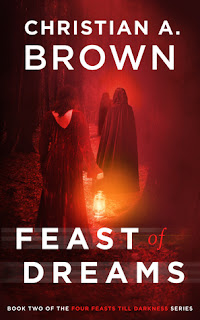 As two queens plot each other's destruction, a small band of adventurers continues its quest for the knowledge needed to defeat the mad King Brutus and his unearthly parasite, the Black Queen. Their search brings Morigan and the Wolf to the perilous forests of Alabion, where they and their companions will face the darkness of their pasts-and discover equally dark destinies.Meanwhile, far from Alabion, the queens of the East and West continue their deadly dance. One seeks a relic of great power, while the other puts her faith in a mix of military and technomagikal force. Both are aware they have a slim window of opportunity to settle their power struggle-after all, Mad Brutus's recent defeat is at best a setback. The mad king is already amassing a new army of soulless husks in the wastelands of Mor'Khul.Unknown to the great powers struggling for control, a father and son wander those same wastelands, scavenging what they can as they weather Brutus's gathering storm. They too have a role to play in Geadhain's fate-a role which may just provide a last remnant of hope.

Portraying Evil by Christian A. Brown

A while ago, I had a lovely blogger review that praised many aspects of Feast of Fates. On that list—and what stuck with me the most—were the reader’s commendations toward some of the darker material in my book. Life is composed of many shades and colors: passionate reds, golden acts of kindness, and the blackest evils. I believe that stories of the scope I wish to tell should encompass that spectrum. Therefore, while I write some beautiful scenes, I also feel the need to balance the scales, to flesh out a realistic environment by adding the unsavory. Neglect, depravity, racism, murder, physical and sexual assault. None of these topics are comfortable to discuss. None of these topics should be handled with anything but care. I deal with each of them in my work. I choose to depict them in the raw, ugly fashion in which they are experienced by their survivors (not victims—there is a notable distinction). As a survivor of assault myself, I see no other way in which these events should be portrayed. As horrific as one imagines—or writes—these scenarios, I assure you the reality is worse. More crippling, more haunting, and usually more violent.

I don’t write dark things because I am a lover of the macabre or a sadist. In fact, often writing these scenes makes me feel as repulsed as when my readers read such material. Good. If whenever Brutus comes onto the page, your skin crawls and you are terrified of what deplorable act he will do, then I’ve done my job. Evil should not have a soft-touch (unless it’s the insidious kind). Evil should make you shiver. How soon we forget in our comfortable North American lives that we live in the same world where Malala was shot for going to school. Where the Montreal Massacre of women seeking to better themselves happened. Where we have genocides and child soldiers. I wish that the events that I write were less dark than those occurring outside Geadhain. Though, they’re not. I feel it is necessary for evil to be accurately described in order to illustrate the journey one (character) takes toward healing.

A Feast of Fates case study, if you will. Please stop reading if you’re spoiler averse and haven’t read the first book yet. (And hurry up! The second book is out now!) In Feast of Fates, we meet any number of characters who have endured trauma. Mouse, who is sold into sexual slavery. She breaks this fate at the cost of her humanity—which she later regains and then some. Macha, who is a displaced indigenous girl that also suffers a reprehensible separation from her family. Kanatuk, another indigenous person who endures a lifetime of horrific abuse—he, too, eventually finds his humanity and strength. Vortigern, who loses his family, his memory, and lives in a state of living-death and forgetfulness. The list goes on. I do not discriminate between male and female, between who should be “fairly” suffering and who shouldn’t. That’s the nasty part about life: it doesn’t give two shits who suffers or why. I’m a sensitive person, and it hurts to write these horrible fates for my characters. However, like the reader and like those of us in the real world, I hold to the hope that these people will learn from their lessons of pain. I believe in them. I believe that they have the power to heal themselves, and to remember the good of humanity. Most of the time, my characters do not disappoint me.

In what is a less easily perceived emotional struggle, we have Lila. She is Queen of Eod and living a glorious and seemingly immortal life with the Everfair King. Long ago, Magnus saved her from a misogynistic, caste-driven society (and marriage). And for a thousand years thereafter she and Magnus were happy together, blissfully happy. That happiness lasts until a horrific—and again, this incident has to be ghastly to sunder a bond of one thousand years—assault by her husband while he is under the possession of an entropic force. A number of complex issues and questions stem from this event. How responsible is Magnus? Can Lila forgive him for this one grotesque incident in their thousand year marriage? He certainly feels guilty. Lila, at the time, puts on a brave face and forgives him. After all, she is the stoic queen of a nation of hundreds of thousands, and her country must come before her needs. She has that mothering sense, of sacrificing her emotions and comfort for others, even though she has not borne children from Magnus (the Immortal king is sterile—at least with her physiology). So she buries her trauma (as people do), and says that she forgives him for the pressing sake of dealing with what evil took over her husband. Sadly, Lila’s story is not unique. Most first time incidents of domestic abuse are forgiven or simply unreported. That’s a statistical reality.

As time and progression through the novel shows us, however, Lila neither forgives nor forgets. The scars are too deep, and those wounds cannot possibly heal in weeks or months—not to a woman that knows eternity. In many ways, Lila is brought back to the very situation and oppression from which she believed herself to have escaped. She questions everything about the brother-kings, their connection to each other and to her, and her sense of individuality and pride. She questions who she really is, for she has become a stranger to herself. The growth and arc of her character is quite broad, spanning all four novels. I have to say though, she is one of my favorite and certainly one of the most inspiring characters once she finds herself. Lila’s journey is one to which many women can relate—regardless of whether Lila is real or not. Being confused. Being lost in the darkness. Forging ahead, even when all she knows is a sickening fear and agony that she can tell no one about. Lila is a composite of all that I’ve learned and seen of women pushing past their station, pushing to define themselves after trauma, and discovering new limits on who and what they thought they could be.