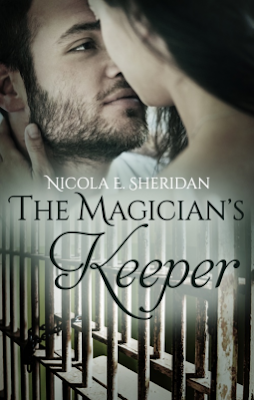 Synopsis:
A brand new steamy paranormal romance about learning to love all of yourself.
In a world where people judge one another by exacting standards of size and style, being a big girl like Eudora Splat was never going to be easy.
Though trouble is brewing between magic folk and human purists who would see them all destroyed, Dora, a half-giant, tries to eke out a quiet, unnoticed life for herself, but it’s hard to be subtle when you’re over seven feet tall.
Losing her job as a gardener due to human complaints, Dora is recruited as a prison guard, where she’s enlisted to protect the magician Evander “Bear” Gordon from human purist attack. Bear encourages her to embrace her power and celebrate her heritage, introducing her to a world where she can be extraordinary and not just weird.
But after years of hiding and shying away, can Dora find the strength to grab onto a new life — and hold on to the man she’s falling in love with?

The Magician's Keeper by Nicola E. Sheridan
My rating: 4 of 5 stars


This is a different kind of read for me in that it didn't include the usual group of paranormal beings. I'm also not used to giants playing an intelligent character. They are normally stereotyped as being a little slow or even dumb. So it was fun to read about Dora, a half-giant because she was very real. She had all kinds of emotions and ideas. She was also pretty tough and held her own in every fight she had. She was the one who rode in and saved the day. (I always like when the female characters are tough and kick a$$). The author did a great job creating a fantasy world but mirroring it close enough to real life that it was relatable. The plot wasn't fast-paced, but I actually found that enjoyable. Too many books just bombard the reader with intense action scene after intense action scene, and they forget to develop the story and characters. I think this book made for a great start to what could become a decent series.