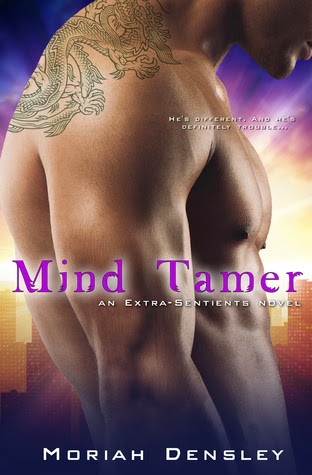 "There is a very thin line when it comes to too much information and not enough."

Lyssa Logan has an uncanny ability to know exactly what you're thinking, and she can solve crimes before they actually happen. Lately, however, she's been having a few issues. Brutal headaches, power fluctuations, possibly losing her grip on reality. Oh, and she appears to have stopped aging... The moment Kyros Vassalos sees Lyssa, he knows she’s one of his kind. No hocus-pocus, no voodoo. They're just very rare "extra-sentient" beings with the extraordinary ability to unlock the full potential of the mind. Now he must teach Lyssa to control her power...before it overwhelms and destroys her. Lyssa is pretty sure Kyros is trouble. Hot, leather-pants-wearing trouble. But she's running out of time. And once she steps into Kyros's world, there's no going back... (Goodreads)

It took me a while to get this particular review posted due to the fact that in many ways I truly did like this story and the extreme potential it carried. But, had it not been for prior knowledge in not only music, having formerly been a violinist myself, and in science I would have been lost before even reaching the middle of the book. While some aspects of this read can still be enjoyed without certain knowledge, all of the musical and scientific terminology makes for some things lost in translation. So while music theorists and scientific gurus will fly through the book and appreciate it being that the language is second hat to them, others may find it not only distracting, but just a little too much.

Lyssa Logan is what is known as an extra sentient creature, her powers coming out in every note and vibration of bravada coming from her violin. She does not truly know what she is, orphaned at a tender age she doesn't remember anything of her mother and never knew who her father was. Her only comfort she has through having her uncanny abilities of reading others minds, is the solace of her violin. Getting lost in her music is all the comfort she has ever truly longed for. Until the sudden appearance of someone else like her makes her abilities not only stronger, but also debilitating. While discomfort is brought about due to this stranger, he also brings tranquility, the knowledge there are indeed others much like her, and a longing for something other than an object.

Kyros Vassalos has lived for centuries working on his theory of quantum physics, and saving as many extra sentients as he can. But while he is out to save them someone else seems to always be hot on his heels trying to destroy them. Staggeringly shocked when he finds Lyssa he makes it his vow to ensure her safety, for female extra sentients are more rare than a black diamond. And upon discovering more and more about her and her powers, he begins to not only fall for her, but to realize whom who father must be as well.

With the potential for being a dramatically good read with the everlasting debate between science and magic all of the terminology and focus on the scientific aspect of things made it fall flat where it could have been invigorating. If there was to be a more scientific focus, instead just using words and numbers, vibrations and light, why not focus on the origins of what these beings are and where and/what the origin of these fantastic abilities they possess come from; literally hypnotic music putting you in whatever mood the artist is playing, beserkers with the strength and rage of legends, telepathy, telekinesis, so many other aspects where the science of things could have been stretched.

So all science geeks (which is a term of endearment because I am one too) and violinists will enjoy this more than anyone else looking for a Paranormal or Science Fiction Romantic read to get lost in and fantasize about. Hopefully the next book will prove better than the first because it does pack a wallop of potential.