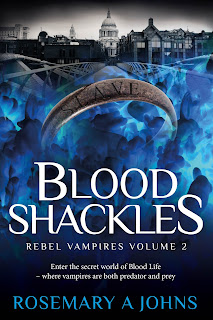 Would you sacrifice your freedom to save your family?

When vampires are the slaves and humans are the monsters, it's a dangerous game to love your Mistress. In a divided paranormal London, Light is the bad boy vampire of the Blood Lifer world, with a talent for remembering things. And a Triton motorbike. Since Victorian times he’s been forced to hide in the shadows. But not now. Not since someone hunted him down. When he’s bought by his Mistress, Light fights to escape. If he doesn’t, he’ll never solve the conspiracy behind the Blood Club.


WELCOME TO THE BLOOD CLUB

Who are these ruthless humans? And who betrayed the secret of the Blood Lifer world?


London, Primrose Hill. Grayse is the slaver’s daughter. She buys Light, like he’s a pair of designer shoes. So why does Light feel so drawn to her? Especially when his family is still in chains. Will he risk everything – even his new love – to save them?


Does a chilling conspiracy lie behind it all? A stunning revelation leads Light to an inconceivable truth. To the dark heart of the Blood Club. If he can face his worst terrors, he can save his family and whole species from slavery.


Maybe he can even save himself.


Blood Shackles is the compelling second instalment in the bestselling fantasy series Rebel Vampires from the critically acclaimed author Rosemary A Johns. Experience a thrilling new suspense with vampires, Rockers and dark romance.

For fans of Night Huntress, Immortals After Dark, Anita Blake, Fever and Blood Dagger Brotherhood take a deep breath and dive into the spellbinding secret world of Blood Life. (Goodreads)

Still grieving over the lost of his Moon Girl, Light finds himself in an even more horrible predicament than ever before.

Torture, suffering, deprivation, starvation, and extreme thirst are only a few of the things that Light must endure during his captivity. What's worst, is that it is only the beginning. Light and other's of his kind have been betrayed, captured and sold into slavery. Some being trained as sex slaves, others as workers, neither with free will.

When Light is bought and sold he may have actually found his salvation. In the hands of the daughter of the man running the entire shindig. But will she truly betray her family to set him free? And even if she does, will he leave his family behind to live a life as a free man in love without chains?

Keep a box of Kleenex on standby while reading this heartrending installment of Rebel Vampires. There is nothing light about the story that is told. Johns paints such a vivid picture the reader will want to step into the pages, ready to run to the rescue but not knowing who they want to save first.
No comments:
Email ThisBlogThis!Share to TwitterShare to FacebookShare to Pinterest