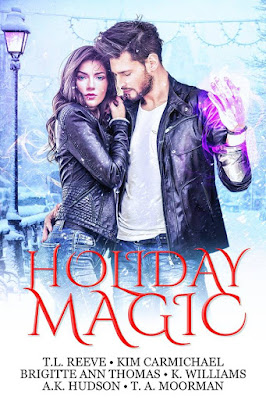 Holiday Magic
A paranormal and contemporary winter holiday romance anthology.
By: TL Reeve, Kim Carmichael, Brigitte Ann Thomas, K. Williams, A.K. Hudson, and T. A. Moorman
Make this winter magical with 6 BRAND NEW Holiday romances.
This Holiday Season SIX amazingly talented and bestselling authors come to together in this collection of Holiday Magic with vampires, witches, shifters, and humans.
Tis the season for a paranormal and contemporary romance anthology with a touch of magic everyone will fall in love with.
https://books2read.com/u/mdN6G5
Goodreads: http://bit.ly/2zWzwpE

A look inside…
Snowbound by TL Reeve
Eight Nights in Eden by Kim Carmichael
I Loved a Warlock from Wichita by Brigitte Ann Thomas
Tarnished Knight by K. Williams

Maia has resigned herself to living life alone, but lately she’s been restless. Maybe it has something to do with the handsome, hurt stranger who comes to the diner every night to walk her to her car after work. When she decides it’s time to try new things, the first impulsive act on her list is inviting Dominic to Thanksgiving dinner.

Dominic is nursing wounds from the past, but in Maia he sees a chance to start again – a chance at the wife and family he’s always wanted. But when his feelings for Maia overwhelm him, will he run, or will he stand and fight for their love like a knight in tarnished armor?
Spark of Solstice by A.K. Hudson
Santa's Curse by T. A. Moorman

What if Santa was a vampire?
Jacquelyn, an enchantress with an overprotective streak, thinks it's up to her to protect her older sister, Jadine, an enchantress who's also a paranoid hypochondriac. So, whenever a male comes along trying to use Jadine, Jackie gets rid of them, in a non-conventional way. When the last person Jacquelyn expects, a certain vampire she's had a not so little crush on, seems to be creeping around on her sister, she has no choice but to get rid of him, too. In front of witnesses. Only to find out one second too late that she had it all wrong.
Victor, like many males, has issues expressing how he truly feels. When he finally decides it’s time to stop running from fate and claim his mate, he goes to her sister for advice. But, creeping in and out of Jadine’s place like a thief in the night leads the very person he wants to win over to draw all the wrong conclusions. Which leads to him trading in his pale good looks for a white beard and a red velvet suit.
Now that the town knows Jacquelyn is the one behind all of the disappearances, and thinking she’s killed all of those that are missing, they're out for her blood. And the only one who can save her is, well, Santa. But will he be able to make it back to her before it’s too late?
Enjoy a brand new tale of how Santa Clause came to be.
https://books2read.com/u/mdN6G5 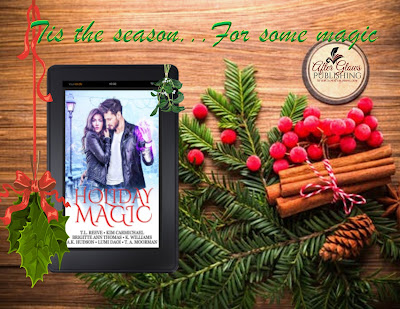 Be sure to stop by the Holiday Magic Release Day Extravaganza!