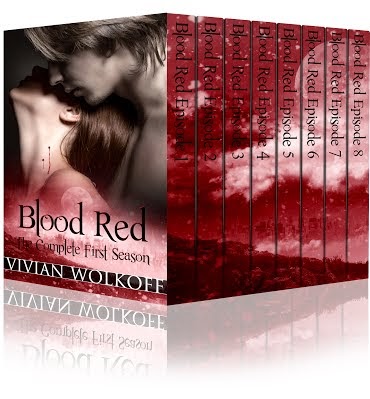 Evie Williams lives a boring life – and she likes it that way. Her world is very black and white. Routine is good. Excitement is bad. She’s happy to play by her self-imposed rules. After all, they help her keep her abusive, stalker ex-boyfriend at bay. Or so she believes…
But there’s more to the world than Evie could possibly imagine. Elves, vampires, witches and pro-Humanity terrorists are very real – and she can sense the danger they pose to her and others. Worst of all, they just realized how precious Evie’s gift is.
As the world Evie never imagined possible closes in on her, Chris, the vampire in charge of studying Evie, is getting more and more interested in her… and it has nothing to do with his loyalty to his vampire father.
Blood Red: The Complete First Season is a story of unlikely heroes, damsels who refuse to be in distress and political conflicts solved by fights to the death.

Chris turned around, ready to make sure Evie was OK.

She was terrified. Her eyes travelled from his blood soaked shirt to his extended fangs and his enraged eyes. She was looking at him like he was her worst nightmare.

He took a step towards her, offering her his hand. Maybe if he acted normal, she wouldn't be so freaked out.
Evie leaned back, gasping.

Chris pulled away, his hand dropping at his side. "I'm not going to hurt you, Evie."

She didn't move. She didn't take her eyes off of him. All she did was let out these shallow gasps that were pure torture to him.

She gulped. "What are you?"

He knew what he should do. He knew he should glamour her, have her forget what she just saw and send her back upstairs. He had to protect the Rule. That meant lying to her. That meant pretending to be just another guy. He didn't want lies between them. He didn't want what he was to taint what he had with Evie — as pointless and silly as that might sound.

Vivian Wolkoff has always been in love with words – even before she could read them. So, it should be no surprise she turned to writing and reading very early in life. She first self-published a poetry book at the age of 13, followed by two honorary mentions in contests promoted by a small publishing house in her native Rio de Janeiro, Brazil. Then, she decided to do some living and find out what else she loved. After college and moving cross-continent twice, Vivian decided to turn to self-publishing again. She is the author of Showmance, the first book in a trilogy about a fake celebrity couple and their crazy fans, and the psychological thriller Love You To Death. Blood Red is the first novel in her Preternatural Chronicles – a shared universe filled with unlikely heroes, damsels who refuse to be in distress, intrigue and epic adventures.