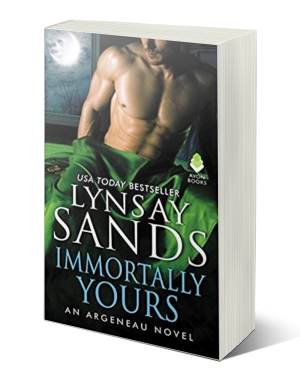 Irresistible chemistry and thrilling suspense combine in this electrifying new installment in One hundred and twenty-five years is a long time to nurse a crush. That’s how long it’s been since Beth Argenis first met Cullen “Scotty” MacDonald and he instantly became the star of her most X-rated dreams. Back then, he was rescuing her from a Rogue Immortal. Now Beth’s a Rogue Hunter—a damn good one. She doesn’t need saving anymore, despite what Scotty thinks. What she does need is the fierce, wild desire that finally erupts between them.Scotty has hesitated to claim Beth as his own. But one explosive kiss confirms what he’s long suspected: She’s his life mate. But Beth is tough, fearless, beautiful…and in immortal danger. Unless he wants to lose her forever, he’ll have to rethink everything he once believed about love and destiny as well as confront an enemy who’s terrifyingly close. (Goodreads)

Lynsay has done it again! I've been a huge fan of hers for years since I first ever heard of her from the library recommendation section. While I absolutely love her I've always worried about her running out of ideas 20+ books in on the same series but I always end up loving it and wondering why I ever questioned it to begin with. Scotty is a great character and I love the internal struggle that comes along with him being an "elder" immortal. While it made me sad that so much time was wasted I can understand how it would be a hard thing to get over (not saying too much to give it away) with what Beth had endured in her life prior to meeting him. The chemistry between the 2 were hot as usual and it wasn't overboard in any way- personally I would be thrilled if there were more love scenes with them but she did it tastefully and modestly which is her normal style. I enjoyed very much the introduction to new characters and the new "russian" while we've mainly dealt with the Scots, English, and Italian immortal families. Beth was just a badass female in this entire book. She was a girl after my own heart, with her being able to take care of herself and not let things in life bring her down. She overpowered so much in her life that you couldn't help but admire her throughout the book. I honestly wished that this book was longer though because now I have to wait even longer before the next release of this family/series.
No comments:
Email ThisBlogThis!Share to TwitterShare to FacebookShare to Pinterest
Older Posts Home
Subscribe to: Posts (Atom)