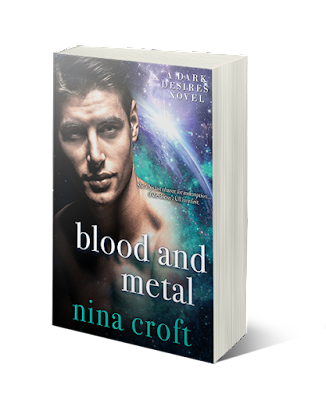 She's his last chance for redemption...if she doesn't kill him first.
Copilot of the Blood Hunter, Daisy is a newly-turned vampire, and she's hungry. Really hungry and it's interfering with her plans for revenge. Unfortunately, the only thing that can distract her from said hunger is sex...which is a problem when she can barely refrain from draining any man dry within moments. But old flame Fergal Cain might just be the sexy-assed solution to her problem.
Part human, part cyborg, and with a poison coursing through his system, Fergal's running out of time to find the scientist who has the cure. Unfortunately for him, the misfit crew of the Blood Hunter put a serious kink in his plans. And if the poison doesn't kill him, the hot little vamp he can't resist might do the honors herself...

5 BLOODY FANGS!
"From being green to sporting fangs, Daisy's life, or rather un-life, is anything but dull."

Nina Croft brings readers back on another starship ride on the Blood Hunter, and once again does not disappoint. Picture Star Trek, mixed with Hitchhikers Guide to the Galaxy, mixed with Riley Jensen and a little bit of Kim Harrison's Hollow's thrown in, and you'll have a close image of this amazing series. The perfect dosage of sci-fi, paranormal, romance and non-stop thrills.

It's Daisy's turn in the spotlight as she loses her green and learns what it truly means to become a vampire. Hopefully without ripping the throats out of any of the crew. When happening upon an old fling from the past, she may have found to perfect solution by substituting her hunger for blood for a hunger of a different kind of lust. Problem? When she allows him entrance into more than just her bed it complicates matters, and may interfere with the crews plans of revenge against the Church. Particularly High Priest Hatcher, the man personally responsible for the deaths' of two crew members.

Fergal Cain is just your average insane reporter who happens to be part cyborg, and on his own since the age of twelve. His most current undercover story is finding the man who made him within six months, before he dies, or worst. And just when his plans to find him, Cain's plans are turned upside down as someone who seems all too familiar, only she has the wrong skin tone, walks back into his life and everything seems to get turned upside down. When Fergal learns of what the crew has planned for the Church, lets just say conflicting emotions doesn't even begin to describe his predicament.

This book should not, I repeat not, be read as a stand alone. In order to fully enjoy it, especially emotionally, readers should read the series in its entirety. A must read for any gender and lover of Paranormal and/or SciFi.