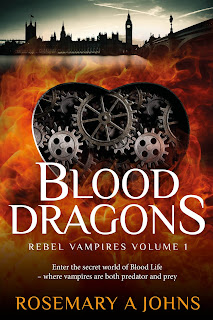 How do you rebel in a family of vampires..? In a divided paranormal London, Light is the bad boy vampire of the Blood Lifer world with a photographic memory, a Triton motorbike, and a love for the hunt. Since Victorian times he’s hidden in the shadows with Ruby - a savage Elizabethan Blood Lifer. But he’s keeping a secret from her that breaks every rule. 1960s London. Kathy is a seductive singer but she’s also human. Light is tempted by the danger, even though their romance is forbidden. When the two worlds collide, it could mean the end. For both species.When Light discovers his ruthless family’s horrifying experiments, he questions whether he should be slaying or saving the humans he’s always feared. Unless Light plays the part of hero, he risks losing everything. Including the two women he loves.A rebel, a red-haired devil and a Moon Girl battle to save the world – or tear it apart.“INTERVIEW WITH THE VAMPIRE MEETS TRUE BLOOD.”Fans of Night Huntress, Immortals After Dark, Anita Blake, Fever and Blood Dagger Brotherhood will LOVE the spellbinding secret world of Blood Life.Blood Dragons is the explosive bestselling first instalment of the supernatural suspense series Rebel Vampires from the award-winning fantasy author Rosemary A Johns. Experience a thrilling new adventure with vampires, unputdownable surprises and dark romance. (Goodreads)Welcome to the Rebel Age!http://viewbook.at/BloodDragons

Light, a bad boy vampire of the Blood Lifer world, has been hiding in the shadows of paranormal London since Victorian times. His only company? A savage Elizabethan Blood lifer. And he’s keeping a secret from her that breaks every rule.

London, 1960s. When a seductive human singer tempts Light with a forbidden romance, their worlds collide. At the same time, Light discovers his ruthless family’s horrifying experiments. Now he’s torn between slaying the humans he was raised to fear, or saving them.

But an effort to play the hero could spell the end…for both species.

This is the first I have read from this author, and while the writing itself was not bad, but having it in a form of monologue, soliloquy, journal to a lover,  or whatever that was, was just down right painful. It didn't really draw me in, just kept right at arms length, very detached. Because Light was not addressing the reader, just his love in her dying state of the life they had in his recounting. To some it just may be your thing, but I need a little more from books. Which is sad because I could see talent from this author. I do have the others, and do plan to giving them a go, just to see if the style is more to my liking.

Oh, don't forget to brush up on British slang, because it's riddled with them. I thought even though I am from America I could figure most out, as I have read British authors before, some threw me for a loop. Some are just not what you really come into contact with day to day. Slang in books is ok, but there is a point that it is just too much, that goes for American slang as well. Maybe it is me, I don't think that I would deter from buying the books due to that fact alone.

I did love the touch of world building in this first installment. I would have loved more details. Overall, my opinion is this is a good start to a series from a new to me author.

Review by Rose
Email ThisBlogThis!Share to TwitterShare to FacebookShare to Pinterest