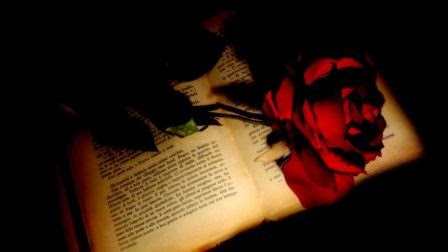 I am a little upset about something, feel free to correct me if I am at all wrong.  But isn't it plagiarism to claim a writing as your own, even a review, if you did not write it?  Now, I know that I post pictures that I find on the internet, but I never claim to have drawn them.  I just find them beautiful and they fit my words.  When I do have time to pick up art again and post my work, I will note that.  But I digress.

When I began reviewing, it was for another website, Nocturne Reads.  I used to even help with the publishing, writing short stories as well as a Legends article for the webmag. When things began to go downhill, organization became non-existent, I decided it was time for me to leave.   I was never paid, that isn't why I did it, wrote for them and helped out as much as I could because of my love and passion for the written word.  Anything I write comes from a place deep within my soul, it is my form of art just as much as my sketching is, even the reviews that I write.  Anyone who knows me knows that I am so much better at getting a point across with the pen than I am with my voice.  So when I went to the site I used to write for and saw someone else's face as the author for my review of Blood Legacy, I'm sure you can imagine the instant hate and rage I was consumed with.

Yes, I understand that this could have been no more than a mistake, but it was not. The reasoning I was given was that since I was no longer writing for them I was taken off the list of Authors, so that I would be taken off of their emailing list and so on, in doing so things reverted back to her as the writer.  She 'didn't have time to go back to each review and manually write in who wrote it'.  Then why not just take the review down altogether rather than take credit for what you did not do.  It makes me wonder if these Authors think that she is the one who wrote all of these reviews now, has she at least told them whom actually wrote the review? Because its amazing to me that I took the time when I published for them to put in whoever it was that reviewed the title.   As I said earlier, I may post pics I did not draw, but I do not put my name underneath it claiming to be the artist.  I do not take their name off of it either.

So correct if I'm wrong, if someone took their time to write the review, shouldn't the person they wrote the review for take the time to give them credit?